The famed director’s twisted series gives new life to the ghoulish ‘Addams Family’ clan while charting the supernaturally infused mystery of Morticia and Gomez Addams’ angsty daughter’s years at the Nevermore Academy; coming to the streamer this Fall. 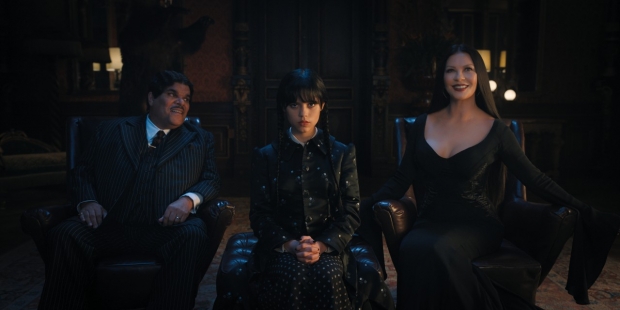 Netflix has released key art and a trailer for the highly anticipated new series, Wednesday, the latest chapter of The Addams Family franchise that follows the series’ namesake daughter of the creepy, twisted, and comic clan.

Growing up in the 60s, one of my favorite afternoon afterschool activities was catching reruns of the original The Addams Family series that first launched in 1964. Entering my existentially turbulent teens, my favorite Addams was Wednesday, with a personality I’m sure my parents were convinced I modeled.

And now, my favorite dark heroine with the ever calm and calculated demeanor returns to the small screen in a new incarnation, poised to inspire the latest generation of angsty teens while giving their parents a nostalgic walk down memory lane. Wednesday, we can’t wait to meet you in your new episodic state, but for now, we must settle with the trailer and a few images to tide us over until the season debut this fall.

In the series, a sleuthing supernaturally infused mystery chronicles Wednesday Addams’ years as a student at Nevermore Academy. Her attempts to master her emerging psychic ability thwart a monstrous killing spree that has terrorized the local town. She is left to solve the supernatural mystery that embroiled her parents 25 years ago while navigating her new and very tangled relationships at Nevermore.