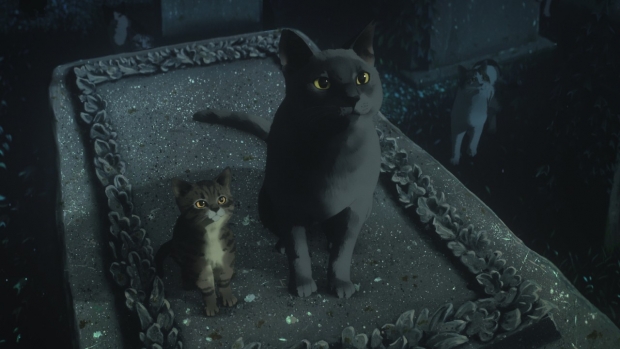 He’s back! For all of us suffering from The Sandman withdrawal after binging the first 10 episodes in a single watching, we can stop scouring streamers for something to fill the void, because Netflix just dropped a two-part bonus 11th episode of the show, available as of 12:01 this morning.

Not only that, but the new episode includes an animated segment, “A Dream of a Thousand Cats,” directed by Undone’s Hisko Hulsing and produced by Submarine Studios. The surprise episode includes guest voice appearances - that will thrill both fantasy and sci-fi fanatics - by David Tennant (Dr. Who) as Don; James McAvoy (X-Men Apocolypse) as Golden-Haired Man; Sandra Oh (Killing Eve) as The Prophet; Michael Sheen (Prodigal Son) as Paul; and “The Sandman” author Neil Gaiman himself as Crow/Skill bird.  Those of us diehard Gaiman fans are thrilled to see the Demon and Angel of Good Omens, Tennant and Sheen respectively, brought back together for this episode.  And, if you’ve ever listened to the Audible audio production of “The Sandman”, you’ll remember McAvoy voiced Morpheus, Sheen Lucifer, and Tennant Loki.

As reported in Variety, according to Hulsing, “We endeavored to make the animated version of ‘A Dream of a Thousand Cats’ as mesmerizing and hypnotic as we could by utilizing the magic of real oil paintings on canvas. We combined the paintings with classically drawn 2D animation, based on realistic 3D animation of telepathic cats in order to create a trippy world that feels both grounded and dreamy at the same time. Untold Studios in London created the breathtaking 3D animation of the cats. The wonderful 2D animation, oil paintings and stylizing were all done at Submarine Studios in Amsterdam.” Check out AWN’s interview with Hulsing about his exacting work on Undone, “Creating an Ambiguous Reality: How ‘Undone’ is Done.”

Netflix’s The Sandman is based on Gaiman’s dark fantasy, 75-issue comic book series published by DC Comics that follows the journey of Morpheus, the King of Dreams.