Watch Maya and Acat, the goddess of Tattoos, battle it out on the way to the magical land of wizards in a sneak peek from Jorge R. Gutiérrez’s highly anticipated 9-chapter tale of a Mesoamerican-inspired warrior princess on an epic quest to save humanity from the vengeful gods of the underworld; series premieres October 22. 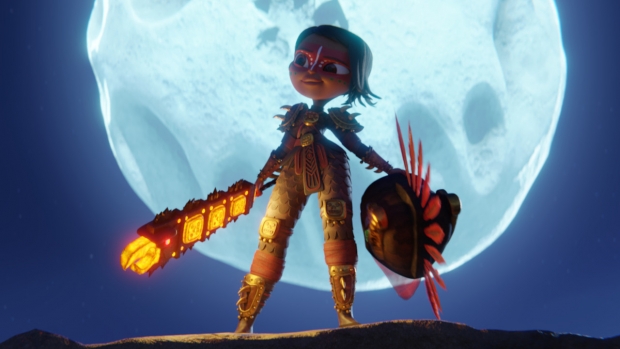 Netflix has released an action-packed new clip from the upcoming Maya and the Three – an animated event told in 9 Chapters. The CGI animated series is the first production under the streamer's original content development partnership with the Emmy Award-winning and Golden Globe-nominated animator, painter, writer, and director, Jorge R. Gutiérrez (The Book of Life, El Tigre), and his production company Mexopolis. The creator’s highly anticipated inaugural Netflix project premieres October 22.

The story is set in a fantastical world, where magic turns the world and four kingdoms rule the lands, a brave and rebellious warrior princess named Maya is about to celebrate her fifteenth birthday and coronation. But everything changes when the gods of the underworld arrive and announce that Maya's life is forfeit to the God of War — a price she must pay for her family's secret past. If Maya refuses, the whole world will suffer the gods’ vengeance. To save her beloved family, her friends, and her own life, Maya embarks on a thrilling quest to fulfill an ancient prophecy that foretells the coming of three great warriors who will help her defeat the gods and save humankind.

In the exciting new sneak peek, Maya (Zoe Saldaña) and Acat, the Goddess of Tattoos (Chelsea Rendon) battle on the way to Luna Island, the magical land of wizards. And make sure to check out the new “Meet the Gods” trading cards Netflix has shared (shown below) as well.