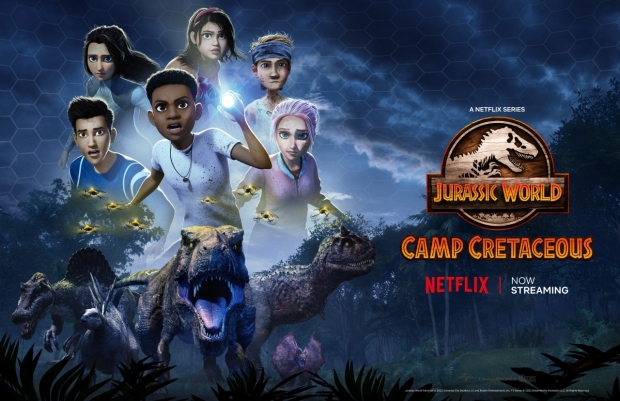 The fifth and final season of Netflix’s Annie Award-winning animated series Jurassic World: Camp Cretaceous hit the streamer yesterday with 12 all-new episodes. Check out four just dropped clips to get you primed and ready for your weekend dino-binge.

In the new season, the arrival of Kenji’s father, Mr. Kon, renews hope of a rescue for the campers. But as the nefarious plans of Mantah Corp. come into focus and one of the Camp Fam turns on their own, the others must band together if they want to save the dinosaurs and ever make it home.

From DreamWorks Animation, Universal Pictures and Amblin Entertainment, the series is executive produced by Steven Spielberg, Colin Trevorrow, and Frank Marshall, alongside executive producers and showrunners Scott Kreamer and Aaron Hammersley. It is developed by Zack Stentz.

Hold on tight for, “Battle in the Bunker:”

“Mission: Save a Trapped T.Rex” (maybe it should be “foster a dino?”)

“Trouble All Around” – They make it look so easy!