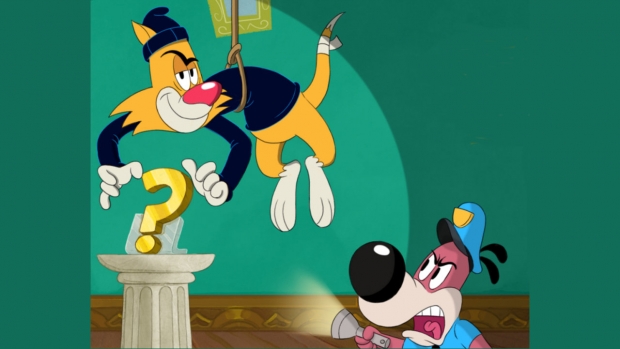 Netflix has released key art and a trailer for their upcoming interactive animated series, Cat Burglar. The edgy, over-the-top, Tex Avery-inspired cartoon comes from the creators of Black Mirror. By answering witty trivia questions, viewers can help Rowdy Cat get one over on Peanut the Security Pup and break into a museum to steal some prized paintings. The show premieres on the streamer February 22.

With an average runtime of 15 minutes, and over an hour and a half of animation to explore, viewers can play Cat Burglar multiple times and unlock previously unseen sequences of Rowdy trying to outsmart Peanut.

The show features the voices of James Adomian (Rowdy Cat), Alan Lee (Peanut), and Trevor Devall as the Museum Director. The animation is produced by Boulder Media.