Well, we finally get to see some superheroes in new images and a ‘From Comic to Screen’ featurette about the upcoming live-action series adaptation of Mark Millar and Frank Quitely’s epic graphic novel series, streaming May 7. 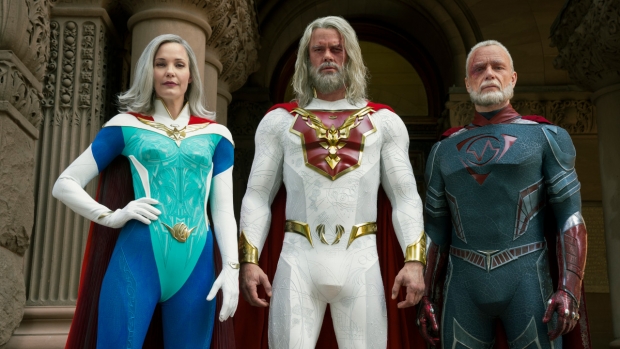 Netflix has just released images and an Official First Look featurette, From Comic to Screen, where “Jupiter’s Legacy” comic book artist Frank Quitely picks up his pen to tease us with imagery surrounding the new series.

Watch as the first Jupiter’s Legacy pics from the series are revealed - transforming from Quitely's exclusive sketches into finished glimpses of the all-new epic superhero drama debuting May 7.

We finally get to see superheroes! And their foes! The season's most terrifying villain, Blackstar (Tyler Mane), comes to life. Hutch (Ian Quinlan), son of one of the world’s greatest supervillains and Chloe Sampson (Elena Kampouris), daughter of the world's greatest superheroes, are introduced. Sheldon Sampson (Josh Duhamel) in 1929 is revealed; and his future son, Paragon/Brandon Sampson (Andrew Horton). Finally, the first-generation superheroes Lady Liberty/Grace Sampson (Leslie Bibb), The Utopian/Sheldon Sampson (Duhamel) and Brainwave/Walter Sampson (Ben Daniels) are unveiled.

We’ve also been warned that fans of the comic should keep an eye out for hidden details:

In the series, after nearly a century of keeping mankind safe, the world's first generation of superheroes must look to their children to continue the legacy. But tensions rise as the young superheroes, hungry to prove their worth, struggle to live up to their parents' legendary public reputations — and exacting personal standards.

Jupiter’s Legacy will consist of eight episodes and is set to premiere May 7th on Netflix.