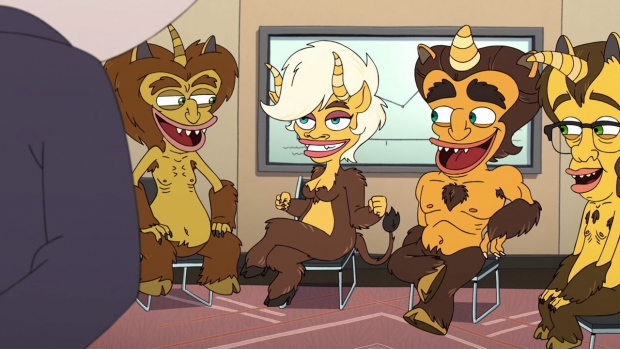 “Keep the break room clean of bodily fluids and be respectful of your colleagues who are cooking lunch while you’re having intercourse.” So notes the first official 2022 helpful reminder for the staff of Human Resources, Netflix’s highly-anticipated new Big Mouth spin-off series premiering March 18. The streamer released a teaser and new set of series images earlier this morning to whet our appetites. Something like that.

Billed as “even edgier and adult-ier,” as if that’s remotely possible, the series pulls back the curtain on the daily lives of the creatures - Hormone Monsters, Depression Kitties, Shame Wizards and many more - that help humans journey through every aspect of life from puberty to childbirth to the twilight years. It quickly becomes clear that though the creatures are the protagonists, they have a lot of humanity themselves.

The series is co-created and executive produced by Kelly Galuska, Kroll, Andrew Goldberg, Jennifer Flackett, and Mark Levin. Titmouse is producing the animation.