Key art also revealed for the next chapter of the not so enchanting Matt Groening comedy fantasy; all 10-episodes hit the streamer February 9. 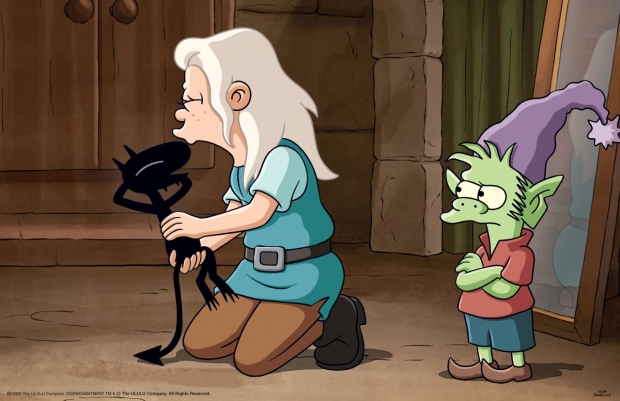 In the leadup to the release of new episodes for Matt Groening’s comedy fantasy Disenchantment Part 4, Netflix has dropped an all-new trailer and key art. The popular 2D animated adult comedy series, which premiered in 2018, debuts its fourth 10-episode set on February 9, exclusively on Netflix.

The show follows the misadventures of hard-hitting, hard-drinking Queen Bean, her feisty elf companion Elfo, and her personal demon Luci. The mystery of Dreamland’s origins - and the stakes for its future - become ever clearer as our trio - and King Zøg - find themselves on personal journeys that will ultimately tie into the kingdom’s fate. Separated at the end of Part III, our heroes race to reunite in the new season.

They’ll find themselves everywhere from the depths of Hell to the clouds of Heaven and everywhere in between, including Ogreland, Steamland, underwater, monasteries, insane asylums, the Enchanted Forest, the Dreamscape and more. All the while, puzzle pieces both canonical and personal will reveal themselves to eager fans.

“We’re excited to continue this epic journey with Netflix,” Groening said in a statement. “Stay tuned for more cranked-up suspense, infuriating plot twists, and beloved characters getting knocked off.”