New series, based on Adam Gidwitz’s best-selling books, follows Hansel and Gretel as they run away from home searching for better parents who won’t chop off their heads. 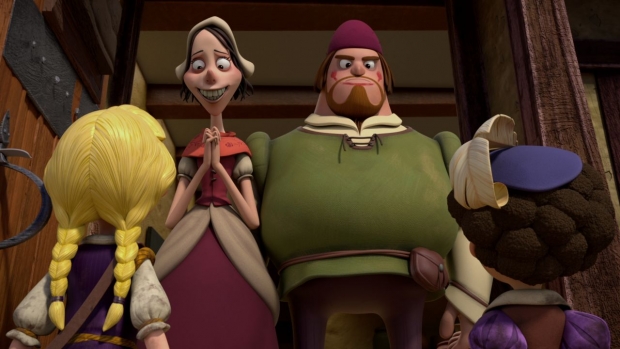 Netflix has just released a trailer, first-look images and a launch date for a new animated comedy series, A Tale Dark & Grimm. Based on the best-selling book series by Adam Gidwitz, the show follows Hansel and Gretel as they run away from home to find better parents...or at least ones who won’t chop off their heads! The series premieres October 8.

In the series, Hansel and Gretel leave their own story and venture through other classic Grimms’ fairy tales; unexpected narrators guide us through their encounters with witches, warlocks, dragons and even the devil himself. As the siblings roam a forest brimming with menacing foes, they learn the true story behind the famous tales, as well as how to take charge of their destinies and create their own happily ever after. Because once upon a time, fairy tales were awesome.

Simon Otto (Trollhunters: Tales of Arcadia) serves as executive producer and supervising director. David Henrie (This Is the Year, Wizards of Waverly Place); James Henrie (This Is the Year, The Good Life); Bug Hall; Bob Higgins (Dino Ranch, The Who Was Show); Jon Rutherford (Dino Ranch, Daniel Spellbound); and Doug Langdale (Dave the Barbarian, The Weekenders) also executive produce. The series is produced in partnership with Boat Rocker Studios in association with Novo Media Group and Astro-Nomical Entertainment.  Animation is being produced by Boat Rocker’s Jam Filled Entertainment.