Netflix Buys Lord and Miller’s ‘The Mitchells vs. The Machines’ from Sony Pictures Animation

Previously titled ‘Connected’ and slated for an October 23, 2020 theatrical release before being unset, the animated comedy from the Oscar-winning ‘Spider-Man: Into the Spider-Verse’ producers will be released later in 2021. 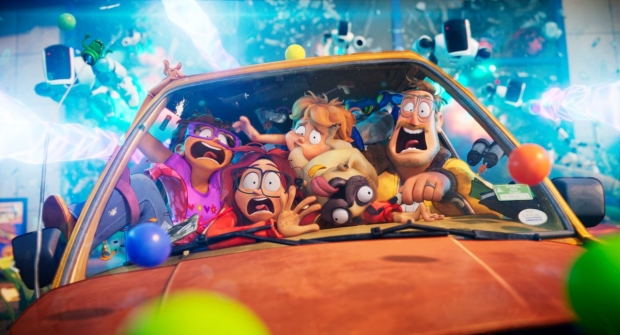 Streaming giant Netflix has just acquired worldwide rights, outside of China, for The Mitchells vs. The Machines, a new animated comedy from Phil Lord and Christopher Miller, producers of the Oscar-winning animated feature, Spider-Man: Into the Spider-Verse. The film, which up until recently had been renamed Connected, was originally slated for an October 23, 2020 release, which was then unset; with the new deal, reportedly worth more than $100 million, the feature will premiere later in 2021.

The Mitchells vs. The Machines follows the exploits of The Mitchells, a “regular” family struggling to relate to one another as eldest daughter Katie (Jacobson) heads off to college. Her father (McBride) suddenly determines that bringing her to school via a cross-country car ride, with the entire family (plus their pug), would be a fantastic bonding experience. But, you guessed it, those plans get waylaid… by a global uprising of electronic devices, including a new line of personal robots, who decide life would be better if they were in charge! And then… you guessed it again… stuff happens, complete with gags and the pug, but the family works together and saves the day!

"This is a very personal movie about my very weird family,” said Rianda. “I’m so grateful to all the incredible artists that poured their love and passion into this project to make it a reality, and to everyone at Sony who believed in us and were on board to make a different kind of animated movie. I'm so thrilled that everyone at Netflix has been totally in sync with us creatively and are just as excited about the movie as we are! Not only because it's an original story with a creative visual style that we're extremely proud of, but also so I can prove to my friends that this five-year journey wasn't an elaborate delusion on my part."

Lord and Miller previously worked with Netflix on the animated comedy series, Hoops, starring Spider-Verse’s Jake Johnson. The critically panned show was canceled after one season. In 2019, the pair entered into a highly lucrative 9-figure development deal with Sony Pictures TV, as well as a first-look film deal with Universal. Last summer, they reunited with series co-creator Bill Lawrence and writer Erica Rivinoja to develop new episodes for Clone High, based on their iconic animated emo culture satire that originally aired on MTV in 2002.

According to the producing duo, “We are overwhelmed by the enthusiasm Netflix has expressed for this movie with this acquisition and grateful to everyone at Sony for making a great picture with us and finding a big way to bring it to audiences. We’re really proud of the film we all made together, plus we understand our subscription fees are waived in perpetuity as part of the deal? We’re not lawyers but it does sound right to us.”

It’s no secret Netflix has been busy in the animated feature space; The Mitchells vs. The Machines joins acquisitions like the recently released Spongebob: Sponge on the Run (outside North America), as well as this year’s Wish Dragon. Those come on the heels of last year’s releases: Sergio Pablos’ Academy Award-nominated Klaus, Kris Pearn’s The Willoughbys, and Glen Keane’s Over the Moon. Features recently announced and in production include the upcoming comedy Back to the Outback, directed by Clare Knight and Harry Cripps; Richard Linklater’s Apollo 10 ½: A Space Age Adventure; Chris Williams’ The Sea Beast; Henry Selick’s Wendell & Wild; Nora Twomey’s My Father’s Dragon; Guillermo del Toro’s stop-motion Pinocchio; Wendy Rogers’ The Magician’s Elephant; and an Aardman Chicken Run sequel.

Melissa Cobb, Vice President of Original Animation, Netflix, noted, “We want Netflix to be the place where families can come and enjoy stories together. And while we know no two families are the same, we think The Mitchells will immediately endear themselves to yours. It's an honor to work with Phil Lord, Christopher Miller and Mike Rianda to bring this incredibly special film to members around the world."