According to Netflix, in the past year, over 100 million households around the world chose to watch at least one of their anime titles, an increase of 50% year-over-year. Anime titles appeared in the Top 10 list in almost 100 countries this year so far. They also noted that Seven Deadly Sins became one of the Top 10 titles among all series and films in over 70 countries since its launch, and Baki in almost 50 countries.

Taiki Sakurai, chief producer, anime, Netflix, said, “In just four short years since launching our creative team in Tokyo, Netflix has expanded the reach and overall audience of anime - a category conventionally seen as niche. Given the success of shows such as Seven Deadly Sins and Baki, we are excited now more than ever to challenge ourselves to expand our aspirational anime programming for fans around the world. To do so, we will continue to invest in new talent, and promote diversity from within. We’re excited to announce welcoming Anand Varna, our second Gobelins Fellowship student to our Creative team through our successful multi-year program with the French institution.”

During this fan livestream, Netflix introduced fans their full upcoming lineup of 16 anime projects, including the five new original projects and 11 projects previously announced. They are as follows: The production of the new series of Rilakkuma has been produced in stop-motion animation following the success of Rilakkuma and Kaoru. The series depicts an active day of incidents and meetings that take place when Rilakkuma, Korilakkuma, Kiiroitori, and Kaoru go play in an amusement park that is about to close. The very popular manga by Yamazaki Mari has been brought back to life in the present day in a new way (“Novae” means “new” in Latin). Based on the manga, new episodes created by Mari Yamazaki will also appear. Lucius, a bath designer in the Roman Empire, accidentally slips back in time to present day Japan and learns about Japanese bath culture in this comedy. 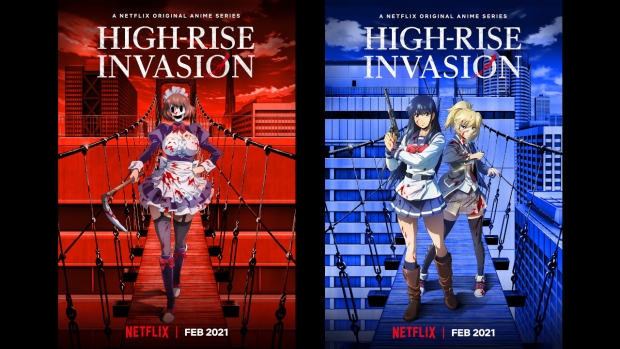 The Way of the Househusband

The most evil yakuza, Tatsu, is a legend in the underworld. He chose to walk away from the yakuza to become a full-time househusband! Based on a story by Kosuke Oono. Director: Chiaki Kon (Nodame Cantabile, Pretty Guardian Sailor Moon Eternal the Movie.) Series Composition: Susumu Yamakawa. Production Studio: J.C.STAFF. Cast: Kenjiro Tsuda. (Coming Soon 2021) Vampire in the Garden

Once upon a time, there was a world where vampires and humans lived together in "Paradise". This is the story of a young girl, Momo, and the vampire queen, Fine, who traveled in search of "Paradise." This is a completely new work by WIT STUDIO, well-known for "Attack on Titan" and talented creators. Director: Ryotaro Makihara. Assistant Director: Hiroyuki Tanaka. Character Design & Animation Director: Tetsuya Nishio. Art director: Shunichiro Yoshihara. Animation Production: WIT STUDIO. (Coming 2021) In a war-torn feudal Japan filled with mechs and magic, the greatest ronin never known, Yasuke, struggles to maintain a peaceful existence after a past life of violence. But when a local village becomes the center of social upheaval between warring daimyo, Yasuke must take up his sword and transport a mysterious child who is the target of dark forces and bloodthirsty warlords.The story of Yasuke, the first African samurai who actually served the legendary Oda Nobunaga, will be released to the world. Director, Creator, Executive producer: LeSean Thomas. Character Design: Takeshi Koike. Music & Executive producer: Flying Lotus. Animation Production: MAPPA. Cast: Lakieth Stanfield. (Coming Soon 2021) There was a time when Kaiju rose from the Pacific Rim only to encounter gigantic robots, Jaegers, built to fight them back. That time has passed. Now, Australia has been overrun by Kaiju, forcing the evacuation of an entire continent. Left behind, teenage siblings Taylor and Hayley embark on a desperate search for their missing parents, teaching themselves to pilot a battered, long-abandoned Jaeger to help in their quest and give them even the slightest hope of surviving. Co-showrunners: Craig Kyle and Greg Johnson. Production Company: Legendary Entertainment. Animation Production: Polygon Pictures. (Coming Soon 2021)

Transformers: War for the Cybertron Trilogy

The WAR FOR CYBERTRON continues with the second chapter, EARTHRISE! With the Allspark gone, Megatron is forced to confront the harsh reality that his Decepticons are trapped on a dying Cybertron while also fighting off the persistent threat of Elita-1 and her Autobots. Meanwhile, lost in the darkest reaches of space, Optimus Prime and his team embark on a desperate mission that will push them to the breaking point as they travel to uncharted new worlds to face spacefaring mercenaries, enigmatic figures from long ago and even their own creators…the Quintessons. Creator: F.J. DeSanto, Matt Murray. Production Company: Hasbro, Rooster Teeth. Animation Production: Polygon Pictures. (Coming Soon) B: The Beginning Succession
After Keith and Koku solved the incidents successfully, the world has regained its composure. In the months since then, Keith returns to the RIS to conduct his own investigation, and Koku is living a peaceful life with Yuna. They are visited by Kirisame, who was once supposed to have broken up with Kurou in death at the Faura Blanca Institute… Original: Kazuto Nakazawa,  Production I.G. Supervising Director: Kazuto Nakazawa. Director: Itsuro Kawasaki. Series Composition: Kazuto Nakazawa, Katsunari Ishida. Character Design: Kazuto Nakazawa, Akane Yano, Hideoki Kusama. Animation Production: Production I.G. Cast: Yuki Kaji, Hiroaki Hirata, Asami Seto, Satomi Sato. (Coming Soon 2021) The story finally unfolds into a full-blooded clash between Baki Hanma and his father, Yujiro Hanma, who is known as the "strongest creature on earth." The climax of the Baki universe, which depicted the "strongest parent-child brawl in history of the world" in the original manga, has been adapted into the long-awaited anime! Original manga: Keisuke Itagaki. Animation Production: TMS Entertainment. Cast: Nobunaga Shimazaki. (Coming 2021)

The legendary manga that took the world by storm in the 1990s has been vividly brought to this animated series by utilizing 2D drawings and 3DCG. The legacy of an outstanding civilization that once existed on this planet is said to still be hidden in various parts of the world. The military of major powers has intervened in the excavation and research of this mysterious and powerful heritage and has begun battling over it. At the same time, an organization called “Spriggan” is working to seal up this ancient civilization. This is a high-speed action series featuring battles over ancient relics! Based on a story by Hiroshi Takashige and Ryoji Minagawa, Shogakukan. Director: Hiroshi Kobayashi. Series Composition and writer: Hiroshi Seko. Character Design: Shuhei Handa. Animation Production: david production. (Coming 2021)