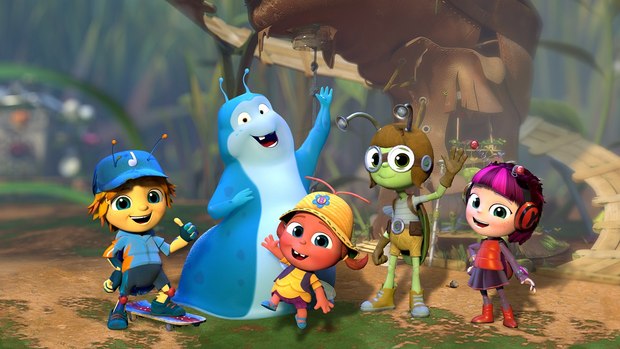 LOS ANGELES -- Netflix, Grace: A Storytelling Company, Thunderbird and Beyond Screen Production have announced that the highly anticipated children’s series Beat Bugs will come to Netflix this summer. Beat Bugs features original characters and a world created by Josh Wakely, who will direct, write and produce the series, following a deal with Sony/ATV Music Publishing for worldwide rights to record covers of the Beatles song catalogue for this production. Australian Netflix members will be able to enjoy the series on Netflix soon after its premier on Seven Network.

Beat Bugs incorporates songs from the Lennon/McCartney ‘Northern Songs’ catalogue, to tell uplifting and life-affirming stories filled with hope and melody. World-leading artists, animators and writers have come together to work on this extraordinary show. The Beat Bugs are charming, funny, adventurous, and have a knack for getting themselves into mischief and mayhem. Each of the five friends (Jay, Kumi, Crick, Buzz, and Walter) has a distinctive personality, and they display the charm and energy of five knockabout, lovable kids. They are best friends who band together to explore and learn in an overgrown suburban backyard, which to them is their entire universe.

The show will feature some of the most well-known Beatles songs woven into the narrative of each episode, with Eddie Vedder, P!nk, James Bay, Sia, The Shins, Of Monsters and Men, Chris Cornell, Regina Spektor, James Corden, and Birdy each recording their rendition of an iconic song. Further artists joining the project are expected to be announced in the coming months. Among the songs featured include “Help!,” “All You Need Is Love,” “Come Together,” “Penny Lane,” “Yellow Submarine,” “Lucy In the Sky with Diamonds,” “Sgt. Pepper’s Lonely Hearts Club Band” and “Magical Mystery Tour.”

“Personally I’m very grateful to be part of Josh’s vision,” said Eddie Vedder. “A tremendous show for kids that combines beautiful animation with great stories and obviously some of the best songs ever written.”

“It’s a rare occasion to be presented with a truly one-of-a-kind children’s show that is so perfectly suited to Netflix,” said Andy Yeatman, director of original kid’s content at Netflix. “Josh and his team have not only developed a compelling children’s show filled with life lessons, but they’ve built a show that will transcend generations and have parents and grandparents enjoying right alongside their little ones.”

Josh Wakely says: “Bringing Beat Bugs to life on Netflix and having a platform to re-imagine this universally acclaimed music for families around the world is an exhilarating and rewarding experience. Our partners have been fantastic in making this concept a vivid reality, and this is a great example of the innovative and fresh storytelling at the heart of Grace’s ethos.”

This marks the first project from Wakely’s independent film and television production and development banner, Grace: A Storytelling Company (Grace) -- which he co-owns with Beat Bugs Executive Producer, Trevor Roy. In addition, Vancouver-based film and TV production group Thunderbird has come on board as a co-production partner, alongside Beyond Screen Production. Atomic Cartoons, a Thunderbird-owned studio, is working on animation for the series. The series is represented worldwide by Beyond Distribution.