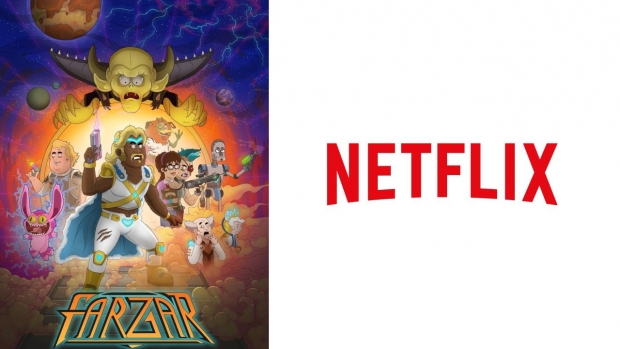 Netflix has just signed a multi-year creative partnership deal with animators, writers, and producers Roger Black and Waco O’Guin, currently the creators, writers, and showrunners of the animated series Paradise PD, which has a new season coming soon to the streaming giant. Under the new agreement, Netflix has ordered the pair’s animated sci-fi series Farzar; the two will serve as writers, and executive producers. They will also serve as co- showrunners of the series. Farzar is an outrageous sci-fi comedy that follows Prince Fichael and his crew as they venture out of their domed human city to fight the evil aliens that want to kill and/or eat them. As they begin their journey, Fichael quickly discovers that all is not what it seems, and he may be living a lie.

“We couldn’t be happier that Netflix finally ‘put a ring on it’,” commented Black and O’Guin. “It’s an awesome network full of nice people and a great place to work! Now we can finally get those matching cherry red PT Cruisers we’ve had our eyes on.”

“Roger and Waco have a signature brand of humor that animation fans around the world love,” added Netflix head of adult animation, Mike Moon. “We are delighted to continue to develop more adult animation titles with these two very prolific creators.”

Black and O’ Guin are both Georgia natives who have been working together since college, when they started a sketch group at the University of Georgia. That campus comedy experience led them to creating the sketch series Stankervision. The Comedy Central series Brickleberry was their follow up, starring and executive producing alongside Daniel Tosh. The three season-run attracted an international following, one which periodically stokes the flames of a revival of the Touchstone Television series. The duo also created the animated series Paradise PD. Black is a graduate of the Savannah College of Art and Design. O'Guin has a degree in animation from the University of Georgia.