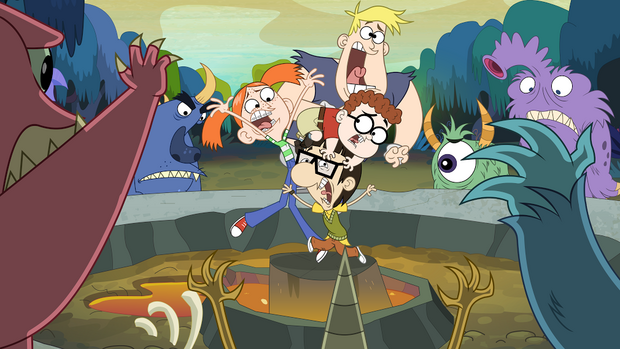 The 20 x half hour series is an animated comedy aimed at 6-11 year olds that tosses a group of nerdy kids on a fantastic uncharted island. The tween castaways must use nothing but their smarts to survive the relentless attacks by the island’s inhabitants – a tribe of hilarious and hideous monsters that are mistakenly threatened by their human invaders. Lucky for the nerds, these dim-witted monsters don’t have any smarts!

“We’re thrilled to finally unleash our Nerds and Monsters onto the world,” said Kathy Antonsen Rocchio, Co-creator and Partner at Slap Happy Cartoons. “And YTV is the perfect network for these ridiculous nerds and hysterical monsters to call home."

“Nerds and Monsters has a hilarious cast of characters that kids will get a chuckle out of” said Jocelyn Hamilton, Vice President, Programming and Original Productions, Corus Kids. “The series fits perfectly with YTV’s lineup of side-splitting animated comedies.”

The series will begin airing the following week in its regular timeslot, Wednesdays at 4:30 p.m. ET/PT on YTV.

Nerds and Monsters is distributed by 9 Story Entertainment.