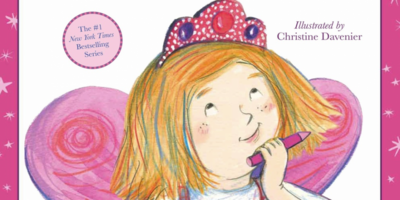 The Very Fairy Princess franchise, which is part of The Julie Andrews Collection, and published by Little, Brown Books for Young Readers, first launched in 2010. Illustrated by Christine Davenier, the book series includes eight titles, with a ninth book, The Very Fairy Princess: A Spooky, Sparkly Halloween, due out later this year. The series chronicles the adventures of Geraldine, who knows deep down that she is a very fairy princess, despite all evidence to the contrary. From morning to night, Gerry does everything that fairy princesses do: she dresses in royal attire, practices her flying skills, and is always on the lookout for problems to solve. But it isn't all twirls and tiaras. As every fairy princess knows, dirty fingernails and scabby knees are just the price you pay for a busy day… it’s one’s inner sparkle that matters most!

“Emma and I couldn’t be more thrilled to be partnering with Nelvana," said Andrews. “The books are all about celebrating individuality. We hope to encourage kids to rejoice in their own unique passions and talents – even if they’re different from that of their family or friends, and Nelvana is the perfect partner to bring our beloved Very Fairy Princess to a wider audience.”

“Our family has enjoyed Nelvana’s programs for years,” said Walton Hamilton. “We have always been so impressed with their quality and their content. It’s a joy and a privilege to be working with Nelvana now on bringing our Very Fairy Princess to life on television.”

The animated TV series will focus on Geraldine, for whom being a very fairy princess is less about appearances than it is about knowing what makes your heart sing, and having the courage to share that with others. Slated to launch on air in 2016, the series will be jointly developed with Andrews and Walton Hamilton and produced at Nelvana Studio in Toronto.

“We love Geraldine’s precocious personality and can’t wait to get to know her even better and bring her adventures to life,” said Irene Weibel, Vice President, Head of Nelvana Studio. “Nelvana takes special pride in bringing beloved books to the screen and it’s a true honour to collaborate with Julie and Emma to extend the world of The Very Fairy Princess to an animated series.”