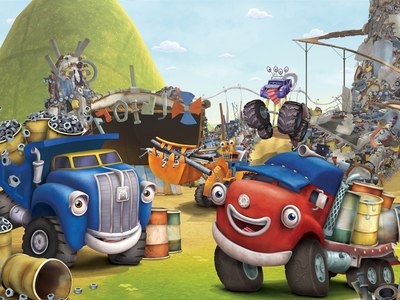 TORONTO, ON -- Corus Entertainment’s Nelvana, an international producer and distributor of children’s animated and live-action content, has named 14 new licensing agents for its popular CGI animated series for preschool brand Trucktown. The new partners will represent the brand on a wide-ranging consumer products program spanning South America, the Middle East, Asia, Europe, and beyond. Nelvana will showcase Trucktown among its other key brands at Licensing Expo 2016, June 21-23 in Las Vegas at the Mandalay Bay Convention Center – Booth H214.

“We are thrilled with the traction Trucktown has received around the globe and look forward to building on the success of the property,” said Pam Westman, Head of Nelvana Enterprises. “Each of our international agents will help us create a winning licensing program that will offer Trucktown fans exciting new ways to immerse themselves in the standout brand.”

Trucktown, which follows the playful adventures of a group of rough and tumble young trucks, is based on a successful series of books by renowned children’s author Jon Scieszka (The Stinky Cheese Man and other Fairly Stupid Tales, The Time Warp Trio, Spaceheadz). Published by Simon & Schuster, the Trucktown series has sold over 1 million books and includes more than 50 titles. The series centers on Jack Truck and his best friends, Dump Truck Dan and Max the Monster Truck, along with the rest of the truck gang, as they roar, romp and power their way through Trucktown. The group of friends have never met a wall they couldn’t smash or a road or bridge they couldn’t build and smash again.