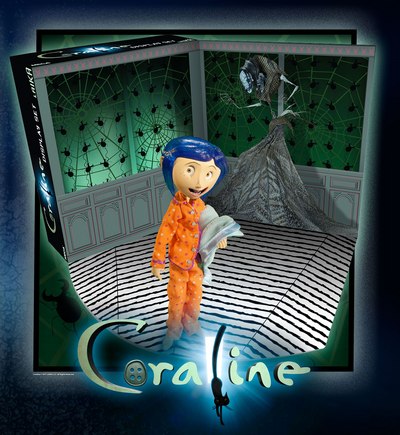 NECA will arrive in San Diego with an exclusive Coraline action figure for sale at Comic-Con, which comes in a deluxe display box, and will be promoting the high-end bespoke replicas of LAIKA’S hero puppets from its four Oscar-nominated films: Coraline (2009), ParaNorman (2012), The Boxtrolls (2014) and Kubo and the Two Strings (2016). The deal was brokered by licensing agency Striker Entertainment, which represents the rights to the LAIKA library of legacy and future films.

Founded in Portland, Oregon in 2005, LAIKA’s mission has been to blend art, craft, science and technology to tell new, original, and innovative stories. The studio’s community of storytellers, artists, inventors, technicians, and craftspeople from around the world is committed to making “movies that matter.”

The deal with NECA coincides with LAIKA’s pop-up exhibit The LAIKA Experience, which is now running in San Diego through July 23rd. The exhibit, located at 520 Fifth Avenue in the heart of the Gaslamp Quarter, features props, puppets, monsters, and sets from LAIKA’s award-winning films as well as fan art, photo ops with LAIKA’s costumed characters, daily drawings for a pair of Nike’s LAIKA-themed shoes designed by Tinker Hatfield, social media activations, giveaways, and more. Travis Knight, President & CEO of LAIKA and director of Kubo and the Two Strings, is scheduled for an autograph session on Friday, July 21st at 3pm. LAIKA merchandise is also available at the pop-up store at The LAIKA Experience.

Highlights of NECA’s multi-category merchandise lineup include Bespoke reproduction hero puppets (Coraline, Norman, Eggs and Kubo) available for consumer orders by end of 2017, with more characters to follow, and a limited edition (only 3,000) Coraline action figure in a deluxe display box (available at the NECA booth #3145 at San Diego Comic-Con and at The LAIKA Experience pop-up shop.)

“We are thrilled to have kicked off our new licensing program with this deal,” says Brad Wald, LAIKA’s CFO and SVP of Business Operations. “There’s a history in working together with NECA on top-selling Coraline replicas (one is back by popular demand and available exclusively at the pop-up store at The LAIKA Experience). NECA is a leader in the industry in providing quality fan-based products and we’re excited to offer a wide portfolio to consumers that reflects LAIKA’s dynamic characters and unique aesthetic. We’re particularly excited by the bespoke puppet reproductions, which answer an ardent fan request that dates back to our first film.”

“Having worked with LAIKA in the past, we experienced that spark that is so necessary, yet so rare,” says NECA President Joel Weinshanker. “We look forward to working with the amazingly creative folks at LAIKA to bring their amazing characters in physical form to the masses.”