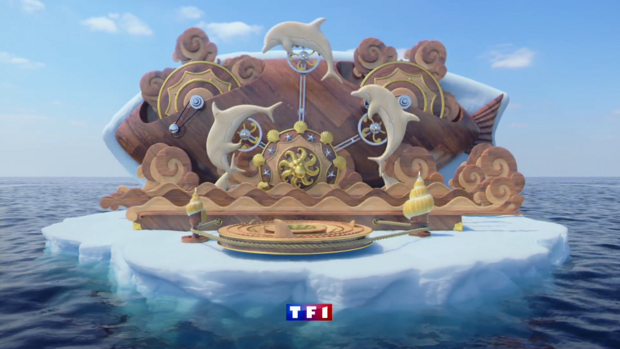 Paris-based graphic and motion design company NAKED picked out New York based production company ROOF studio to help them develop an exciting and innovative project involving 45 eight-second bumpers for TF1 – one of the largest television networks in France (and a major European industry player), in just 5 months.  NAKED worked closely with ROOF to imagine original and captivating bumpers, evolving around the notion of surprise and mechanisms. ROOF’s quality of 3D work, reliability and dynamism made them perfectly suited partners to assist NAKED in this challenge. Each bumper depicts a vibrant and extremely precise detailed 3D animation of a mechanical world and the variations of themes seem to be nearly endless.  From bumper cars to elaborate alarm clock stereo systems to a volcano with a giant espresso pot inside, these surprising and innovative bumpers show the surreal imaginations of the creative team and their passion for outstanding quality broadcast work.

Thriving on the spirit of collaboration, the ROOF creative team had worked entirely through the cloud, using a pipeline built with tools like Podio.com and Amazon that enabled them to produce in a new and efficient way. These collaboration tools enabled them to share ideas and techniques in real-time with trusted talents across the globe. The TF1 campaign also demonstrates Roof’s ability to create large scale creative campaigns while maintaining quality.

ROOF also re-launched a new website showcasing the volume of work with the TF1 bumpers and other new works from Panera and Amnesty International.  All works demonstrate their appetite for details, style and attitude to leave their mark in the industry.

ROOF, represented by WIZZdesign in France, was founded by designer/director Vinicius Costa, director Guto Terni and executive producer Crystal Campbell. They devised a plan for a “new flavor of studio.” The studio’s name is a reflection of its principals’ belief that the collaborative process on any job is every bit as important as the end result. It is by bringing the right creative minds under this one ROOF that distinctive works of art will result.

Originally from Rio de Janeiro, Brazil, Costa joined 1st Ave Machine in 2009, and would spend the next few years employing his visual effects, animation, design and live action skills to his work with a diverse group of clients, including Microsoft, Sony, Coca-Cola, Pfizer and Volkswagen. In 2011, Costa was named as one of the ADC Young Guns winners, in recognition of what the jury called his “stunning craftsmanship and imagination” and “jaw-droppingly detailed, original and weird” work.

Also from Brazil, Terni was director and partner at Vetor Zero, the largest visual effects company in Latin America, as well as being a founding partner of Sao Paulo’s Animatorio. His extensive experience in 3D, 2D, visual effects and stop motion has been recognized with awards from the Art Directors Club, a Cannes Lion and multiple Clios.

Campbell is a graduate of Columbia University with over 15 years of 3D, editing, visual effects and live action production experience. Before co-founding ROOF, she worked at 1st Ave Machine, Psyop, Superfad and other production companies, and with clients ranging from Coca- Cola to Google, IBM and GE.