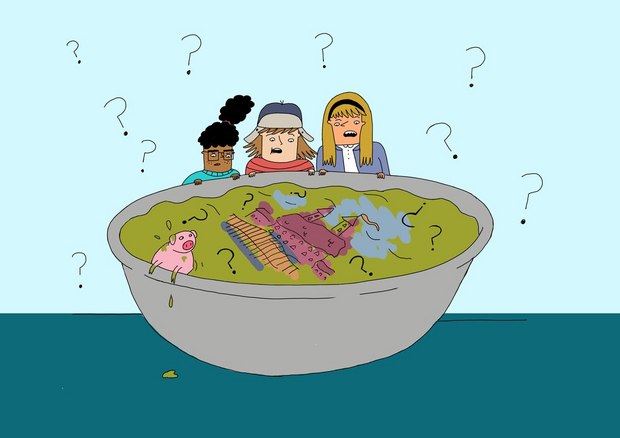 CBBC and BBC Worldwide announced surreal 2D animation comedy Mystery Soup as the winner of ANIM8, the channel’s first animation pilot scheme. Mystery Soup’s creative team, writer Victoria Manifold and director Hannah Jacobs, will now work with CBBC and BBC Worldwide to develop their project through to a pilot, which will be delivered in September 2016. Development will be headed up by Sarah Muller, CBBC’S Creative Director, Scripted, Animation and Co-Productions at CBBC and Nathan Waddington, Head of Children’s, Scripted at BBC Worldwide. The highly competitive ANIM8 scheme was launched in November 2015, and received almost 300 submissions. Its aim was to find the next big thing in animation, and was to open up pitches to individuals, studios and companies from across the UK. ANIM8 winner Mystery Soup follows three plucky thirteen-year-old girls, who find themselves plunged into mystery at a handsome school for dedicated boys and girls. Hen, Olive and B are bold, fearless and funny as they investigate their weird new boarding school and its bizarre goings on.

Jacobs wanted to stay true to her illustrative roots and love of 2D animation when creating Mystery Soup. Jacobs and Manifold drew inspiration from animated comedy series like The Simpsons, Bob's Burgers, and The Regular Show where the design is as integral to the comedy as the writing. Their goal was to give Mystery Soup a similar illustrative aesthetic. Manifold said, “It was really important to both of us to create an animated series for kids that had strong, funny female protagonists but wasn't dubbed 'girly'. Our characters are adventurous and fearless but just so happen to be girls too. This was at the forefront of our idea for Mystery Soup. A boarding school seemed like the perfect setting for our ideas. The opportunity for kids to be unsupervised lends itself to all sorts of mischief and adventures. We were lucky in that the BBC very much supported this idea and backed us all the way. It was great to be given the time and money to develop an idea we felt so passionate about. We're so excited to embark on the next part of the process and see our ideas come to life in the pilot. Working on an animation has been something we've both dreamed of since childhood and we're still in shock that we get to make our dreams come true.”

Cheryl Taylor, Controller, CBBC, added, “The ANIM8 process was a brilliant way of meeting writers and creators from very diverse backgrounds and we've loved every minute. Along with our colleagues in Worldwide we're now impatient to develop the winning project, ‘Mystery Soup’ and help it reach its obvious potential.”

“ANIM8 supports BBC Worldwide in its mission to take the best of British creativity to the rest of the world,” commented Henrietta Hurford-Jones, Director of Children’s, BBC Worldwide. “Our ambition was to find creatives and concepts to mirror the success of titles like Sarah & Duck and Hey Duggee, but this time we were on the lookout for character driven, fast-paced comedy which will appeal to older kids. With Mystery Soup, we believe that we've found an original, quirky, funny show that will resonate with a Global audience”