‘My Mom is an Airplane’ Soars at TIFF Kids Awards

The winners of the 2014 TIFF Kids International Film Festival are announced, with My Mom is an Airplane picking up the TIFF Kids Adult Jury Award for Best Animated Short Film. 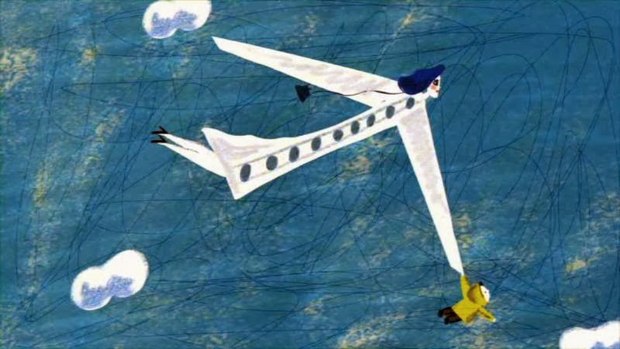 “TIFF is committed to transforming the way people see the world through film, and this begins with our youngest audiences,” said Elizabeth Muskala, Director of TIFF Kids. “TIFF Kids continues to provide an opportunity for young people to engage in the critical assessment of cinema, where they can voice their opinions while strengthening their media literacy skills, creating a lifelong love affair with film.”

The Adult Jury selected this film “For its excellent acting, its compelling images, its creative structure, and for constantly surprising us.” Honourable mention goes to A Different Tree, dir. Steven Caple Jr., USA. English.

The Adult Jury praised their selection “For its fresh treatment combining unique ideas and exuberant, childlike images, and for being a total pleasure to watch.”

TIFF Kids Audience Choice Award —Best Feature Film
Regret! (Spijt!), dir. Dave Schram, The Netherlands -- Toronto Premiere
Based on the book by popular Dutch author Carry Slee, this all-too-realistic story about a teenager relentlessly tormented by his peers speaks powerfully to the devastating consequences that can result if young people don't stand up and speak out against bullying. Recommended for ages 11 and up.

TIFF Kids Audience Choice Award — Best Short Film
The Numberlys, dirs. William Joyce and Brandon Oldenburg, USA. English -- International Premiere
The Numberlys is an epic homage to Fritz Lang's Metropolis, but for kids. Friends 1, 2, 3, 4 and 5 live in a world where there is no alphabet — only numbers. One day, they decide they want something different from their orderly, black-and-white world. Through a series of experiments and mishaps, they begin to create a whole new way to communicate through the letters of the alphabet. Finally, their world will have colour, creativity, and even jellybeans.

digiPlaySpace People’s Choice Award: Favourite App
Cut the Rope 2
In his unexpected adventure, created by ZeptoLab UK Limited, Om Nom breaks out of his box and travels through lush forests, busy cities, junkyards and underground tunnels, all in pursuit of one goal — CANDY!

TIFF Kids Festival Young People's Jury Award (Ages 8 to 10) — Best Feature Film
Felix, dir. Roberta Durrant, South Africa. English/Xhosa/Afrikaans.
Thirteen-year-old Felix dreams of becoming a saxophonist like his late father, Zweli, of the famous Bozza Boys band, despite his mother Lindiwe’s disapproval. Felix’s world is turned upside down when he wins a scholarship to a prestigious school. Wanting to prove himself, he auditions for the school concert, but he can’t read music. Two aging ex-Bozza Boys give Felix a crash course on the saxophone and teach him about his musical roots and father’s past—but can his mother come to celebrate Felix's musical talent?

On choosing this film, the jury said, “Felix’s desire to keep his father’s memory alive was touching. The jazz music was very well played and helped keep the beat up during sad moments. Humour was also used very well to lighten the mood.”

TIFF Kids Festival Young People's Jury Award (Ages 11-13) — Best Feature Film
Side by Side, dir. Arthur Landon, United Kingdom. English.
When their grandmother's illness threatens them with separation, a young brother and sister embark on an unforgettable journey through the Scottish wilderness, in this heartfelt adventure tale that celebrates loyalty, perseverance, and the bond between siblings.

The Young People’s jury explained their decision, “This UK production had amazing cinematography, the actors were all powerhouses who we connected with emotionally, and we all agree that the soundtrack set the scenes perfectly.”

TIFF Kids Festival Young People's Jury Award (Ages 9-13) — Best Short Film
The Dam Keeper, dirs. Dice Tsutsumi and Robert Kondo, USA. English.
In a desolate future, one town has survived because of a windmill dam that keeps out poisonous clouds. The dam's operator, Pig, works tirelessly to keep the sails spinning and protect the town, despite bullying from classmates and an indifferent public. When a new student, Fox, joins Pig's class, everything begins to change.

The Young Peoples Jury said of their decision, “The reason we picked this movie is because of the multiple acts of awareness towards bullying … it had a strong message about being nice to people even if they are different.”

The Veronica Herman Award for Best Film (Grades 7 & 8)
Call of the Dead, dirs. Alice Irving Hughes, Grace Irving Hughes, Elizabeth Elliott, Finn Hourihan, Max Lafferty and Derrick Price. Toronto
The literal zombification of grade 7 and 8 students through their obsession with and overuse of technology makes for a ghoulishly good time.

The Frederick Simpson and Veronica Herman Awards are generously supported by Garrett Herman. Each Grand Prize–winning film will also receive a Jump Cuts Bursary courtesy of RBC, to encourage the development of young voices in film. The Jump Cuts Young Filmmakers Showcase is sponsored by RBC.

TVOKids is also proud to support young filmmakers of Ontario. The TVOKids Choice Award for Grades 4 to 6 in the Jump Cuts Young Filmmakers Showcase were presented to the short film in that age category that best represents TVOKids’ values. From April 1-18, kids were invited to watch the top three nominated short films at tvokids.com/tiff and vote for their favourite. The winning film will air on TVOKids.

From April 8–21 at TIFF Bell Lightbox, the TIFF Kids International Film Festival celebrated 17 years as one of the most important film festivals in North America with special programming and activities for children aged 3 to 13. This year featured a compelling lineup of 112 films—28 features and 84 shorts—representing the best of Canadian and international cinema, an exciting slate of special guests, hands-on family activities and showcases for young filmmakers, and the return of the immensely popular award-winning TIFF Kids digiPlaySpace, an interactive exhibition which included interactive installations, learning-centric games, apps, new digital creative tools and hands-on activities.