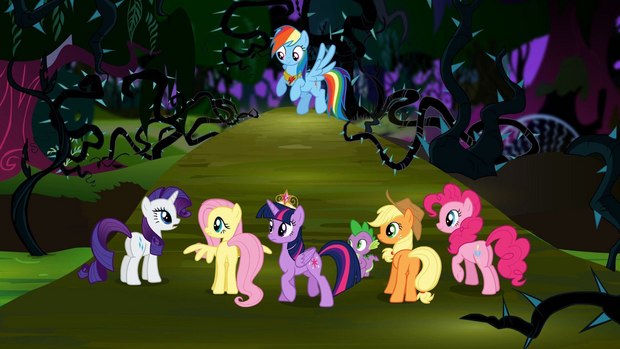 Pony fans, rejoice! An all-new season of My Little Pony: Friendship is Magic, the beloved series created by Hasbro Studios, will debut on Discovery Family April 4, with two back-to-back premiere episodes beginning at 11am ET / 10am CT. Packed with new adventures, characters and self-discovery, Season 5 kicks off with a very special one-hour premiere, as our favorite ponies continue to explore the true magic of friendship only possible in Equestria.

“Season 5 will really delve more into how the magic of cutie marks and friendship can impact those around you,” teases Hasbro Studios Executive Director, Brian Lenard. “You’re going to see a lot of new and exciting characters this season, and first and foremost is Starlight Glimmer.”

In the Season 5 premiere of My Little Pony: Friendship is Magic, the Mane 6: Twilight Sparkle, Rainbow Dash, Pinkie Pie, Fluttershy, Rarity and Applejack meet Starlight Glimmer when they are summoned to solve a friendship problem only to find a utopian village in which everyone has given up their Cutie Marks. At first look, the ponies in this village appear happy, but it soon becomes clear that Starlight Glimmer has a vastly different and rather sinister view on friendship and the individual talents that make Equestria’s ponies so special. The season is full of Cutie Mark Magic!

This cliff-hanger episode heralds a season filled with surprises and special treats for viewers, including the appearance of celebrity guest voice Tony Award-winner Lena Hall, the series’ exciting 100th episode, fun holiday specials and several new, original songs soon to be fan-favorites. In this season, viewers will be introduced to new characters and see background characters brought to the forefront for the first time, all as part of a journey that embraces such themes as individuality, coming of age, facing fears and achieving your dreams.

“My Little Pony: Friendship is Magic has amassed an adoring fan base that truly spans all ages,” said Tom Cosgrove, General Manager of Discovery Family. “We’re delighted at the opportunity to keep this audience entertained while sharing the series’ enduring and positive messages of friendship.”

My Little Pony: Friendship is Magic follows the magical Princess Twilight Sparkle and her trusted assistant Spike, who live in Ponyville in the enchanted land of Equestria, along with her colorful pony friends – honest Applejack, generous Rarity, kind Fluttershy, loyal Rainbow Dash and fun-loving Pinkie Pie. Together, they teach one another valuable lessons about the most powerful magic of all – the magic of friendship.