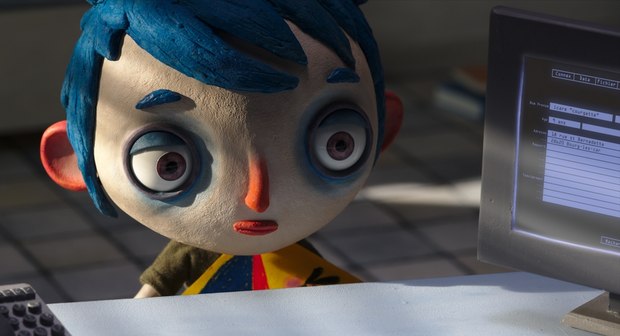 PARIS -- Independent animation distributor GKIDS, has announced that its film My Life as a Zucchini (Ma vie de Courgette) won César Awards for Best Animated Feature and Best Adapted Screenplay (Celine Sciamma). My Life as a Zucchini was also nominated in the Best Original Score (Sophie Hunger) category. The César Awards are presented by the Academy of Cinema Arts and Technique, and are the highest national film honor in France, equivalent to the American Academy Awards.

My Life as a Zucchini, which is currently nominated for Best Animated Feature for the 2017 Oscars, recently won Best Animated European Film by the European Film Awards (EFA) and was nominated for Best Animated Feature film at the 2017 Golden Globe Awards. The film also garnered three Annie Award nominations in the Best Animated Feature -- Independent, Directing and Screenplay categories, and was honored as the Best Swiss Film by the Association of Swiss Film Critics (ASJC). My Life as a Zucchini made its critically acclaimed world premiere in the Director’s Fortnight section of the 2016 Cannes Film Festival, then went on to win both the Grand Prize (Cristal) and the Audience Award at the 2016 Annecy International Animation Film Festival.

In addition to a rave review from Rolling Stone’s Peter Travers, Los Angeles Times’ Kenneth Turan said, “Critics’ pick! A delight! My Life as a Zucchini is an example of the kind of movie magic that’s always hard to find.” Wall Street Journal’s Joe Morgenstern called the film, “Magical! Went straight to my heart! One of the most touching, surprising, slyly funny and quietly subversive films in recent memory.” The film, which opens today New York and Los Angeles in its French and English language versions, is officially certified fresh at 100% on Rotten Tomatoes. For information about tickets, visit www.mylifeasazucchini.com.

My Life as a Zucchini follows a young boy called Zucchini. After his mother’s sudden death, Zucchini is befriended by a police officer, Raymond, who accompanies him to his new foster home, filled with other orphans his age. At first he struggles to find his place in this at times strange and hostile environment. But with Raymond’s help and his newfound friends, Zucchini eventually learns to trust and love, as he searches for a new family of his own. Brought to life through striking character designs and expressive stop-motion animation, the story soars with laughter, sorrow, and joy, and stands as a testament to the resilience of the human heart.

My Life as a Zucchini is directed by Claude Barras and written by Céline Sciamma, adapted from the novel “Autobiographie d’une Courgette” by Gilles Paris. It is produced by RITA Productions (Max Karli and Pauline Gygax), Blue Spirit Productions, Gebeka Films and KNM (Kate and Michel Merkt), in coproduction with the RTS - Radio Télévision Suisse, SRG-SSR, France 3 Cinéma, Rhône Alpes Cinéma and Helium Films, with international sales handled by Indie Sales.

Claude Barras is Swiss-born and based in Geneva. After studying illustration and computer graphics, he went on to direct several short films such as Au Pays des tetes, Stigmates 2D, and The Genie in a Ravioli Can. Barras founded his own animation company, Helium Films along with fellow illustrator Cédric Louis and is represented by U.S. talent agent Jerome Duboz of William Morris Endeavor. Zucchini is Barras’ first feature-length film is realized by the writing of celebrated French director/producer Céline Sciamma, known for her vividly genuine take on growing pains and the journey of adolescence in her films Tomboy, Water Lillies, and Girlhood.