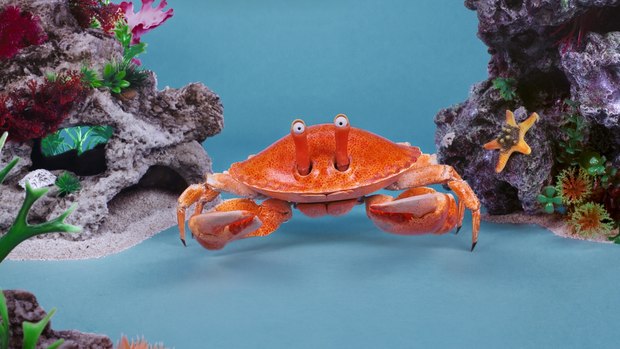 Loveable animated sea creatures, created and scripted by Rock Hound’s Amy Becker Burnett, invite viewers into a dreamy underwater world of nostalgic charm. Stylistically, soft color pallets and unpolished edges lend themselves to the reminiscent world of 70s and 80s classics such as Bagpuss, The Flumps and Stingray. Achieved entirely in-camera, this marks a refreshing departure from the CGI-laden brand mascots that we are used to seeing adorn our TV screens. A visual treat of imaginative childlike wonder, the sport is magical yet relatable, clearly communicating Aqua’s key message.

“The hand-crafted feel and love for detail has always been at the heart of the concept and stop frame animation felt like the perfect medium to execute the playful and humble aesthetic. Having everything captured in camera has given the piece a distinctive charm but also an element of reality, the textures feel richer and the movements more organic,” comments Becker Burnett. “I put nostalgia at the forefront of the creative to harp back to the simplicity and safety of childhood, we latch onto memories of the past to give us faith in the future. The retro influences draw customers away from the association that choosing a credit card is a stressful process and position Aqua as a friendly, fair and approachable company.”

The campaign film was expertly brought to life by animation veterans Mummu, using a more traditional stop-motion approach to create a television ad that stood apart from current trends of origami-style animations. Having previously delivered animations in this style for Disney Channel and DK Books, Mummu was the perfect partner. Creative director Sam Atkin drove the 2D process, masterfully developing the characters by using exaggerated features and playful compact proportions. Directing duo Joe Orton and Daniella Orsini worked in close collaboration with Becker Burnett to co-direct and beautifully dress and frame each shot, crafting the feeling of a story book style rock pool without the use of CG.

“Like the old children’s TV shows we were referencing, we focused on the charm of the characters and the beautiful dressing of the scene to communicate the underwater spirit, rather than trying to push for realism,” comments Mummu’s creative producer on the project, Karl Hammond. “Our aim was to create a unique look that stood apart from the usual hyper-polished, character-driven animated adverts. We were lucky to have an amazing team with us. Model creators, Machine Shop, were able to perfectly match the proportions of the designs and create life size models of each character, while Joe Orton and Daniella Orsini fully understood what was achievable with the models and the limitations of the process.”

Smoke & Mirrors Mark Horrobin’s color grade offered a sensitive finish to the inspiration behind the piece working with muted dreamlike tones and brighter more florescent accents to enhance the kitsch look. Music composition and sound effects were used to enhance the warm and uplifting feel of the spot.

The collaboration between Rockhound, Mummu, Machine Shop and Smoke & Mirrors resulted in the development and delivery of an evocative bespoke advert for a valued client, New Day. Aqua “Rock Pool” launched April 3rd, 2017 on TV and online in the U.K.