MPC NY Brings On The Storm for New Balance 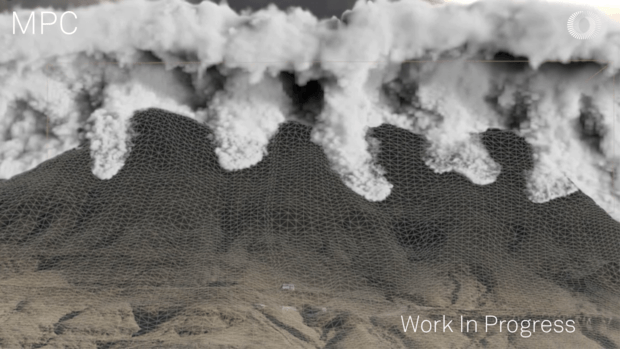 MPC’s CG & 2D team created over 50 complex VFX shots within six weeks, reimagining a fully CG storm breaking over the Moroccan-shot mountainside and engulfing the protagonist in an intense plume of sports figures running, batting, smashing onwards towards even greater athletic accomplishments. VFX artists seamlessly composited the infinite host of athletes across the sequence of shots as they charge together through the dramatic storm. Creative Travis Robertson said, "This project was full of creative and logistical riddles. Shooting a CG job of this scale on three continents, with 17 professional athletes and a small army of extras proved to be a truly massive undertaking. But when the dust settled (no pun intended), we were left with an amazing visual spectacle we are all incredibly proud of. MPC did a fantastic job bringing the bizarre, colorful and violently poetic storm to life. From the countless hours of smoke tank and saltwater filming to the violent and dynamic bursts of color to the motion tracking and effects supervision throughout the storm, no detail was overlooked." The VFX-fuelled spot was filmed across Miami, London and Morocco over four weeks, featuring 17 pro-athletes including Miguel Cabrera, Robinson Cano, Jenny Simpson, Milos Raonic, Heather Watson and Aaron Ramsey. In addition to in-store, digital, and print advertising, the brand campaign features an online “Beta Hub” experience at newbalance.com/beta, which invites consumers to immerse themselves in all things Beta with stories featuring the brand’s athletes and product innovations.

In close collaboration with the director and Arnold’s creative team, MPC’s artists, led by VFX supervisors Rob Walker and Vicky Osborn, took the creative reins to explore and enrich the storm sequences. MPC took a two-pronged approach to create the storm: the exterior and the interior. Rob comments on the process, “The starting point for the interior of the storm came from a cloud tank element shoot in Miami, which provided most of the dramatic backgrounds. We shot some pretty amazing footage, and lots of it, at up to 100 frames-per-second with 5K resolution that allowed us to zoom into a part of the plate without compromising quality. In the end, we whittled down roughly 10 hours into 12 minutes of beautiful footage that formed the basis for the inside of the storm. We combined this with a simulated CG storm.” In parallel, Houdini artists began R&D on the exterior of the storm, exploring its movement and developing its look. A key part of the agency brief was to have the storm mirror the structure of a wave, which proved to be challenging as the Houdini simulations were based on real world physics and scale. The rendered simulation would often produce quite random results, each one being totally unique.

“Our next stage was to simulate the interior storm,” Rob continues. “Johnny's boards had interesting sketches where you feel the storm chasing the athletes and partly swallowing them in it. This was something we found interesting and wanted to develop. A key part of our creative decisions in designing the storm was the need to recognize the athletes rather than having them obscured or lost within it.”

The team took an inventive approach to design a 'kit of parts' rendered in Houdini, offering flexibility and control in compositing the athletes’ prominence on-screen. This technique enabled the team to choreograph all manner of motion and intensity, and play with varying scale in the same shots.

The result is flawless cohesion across the film, ensuring the “Always in Beta” state of mind remained center stage in the dynamic yet ethereal New Balance storm.