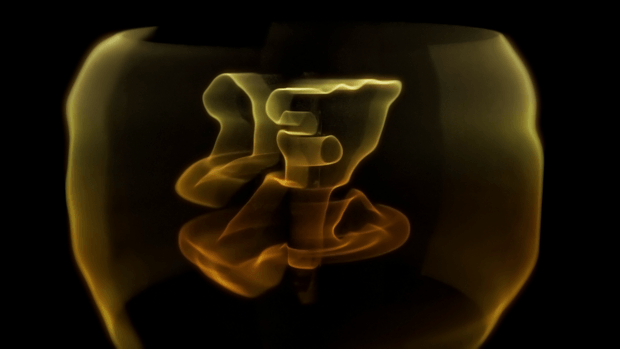 LONDON -- As part of Hennessy’s 250th anniversary, the world’s most celebrated cognac has teamed with MPC Creative to create a ground-breaking dynamic light installation to be on display in Harrods’s luxury window display this October. The installation is a stunning and unique modern take on a long-standing optical illusion. The piece will be on view in Harrods from 1st October as part of the iconic store’s Cover to Cover theme for the autumn.

The Installation, entitled “Crafted Light”, has been designed to celebrate Hennessy’s heritage of innovation and craftsmanship, displaying visual content which brings to mind the very essence of the cognac itself through golden hues and abstract fluid motion graphics.

Mary Rochester Gearing, Senior Brand Manager, Hennessy UK said, “Hennessy has been at the forefront of innovation in the Cognac category for 250 years. Given the importance of this year, we wanted to create a visionary piece to capture the essence of Hennessy and that embodies the philosophy of crafting the future – MPC Creative have done this perfectly through ‘Crafted Light’.”

Gearing added, “’Crafting the Future’ is integral to Hennessy with the eaux de vie selected each year beginning an orchestrated process of maturation that may not see them used for generations when Hennessy’s future tasting committee may choose to blend them. Harrods provides the perfect space to display the installation.”

The installation is an evolution of the optical illusion technique known as Persistence of Vision, which originated with Victorian-era optical illusions like zoetropes and thaumotropes. Updated for the digital age this piece further evolves the screen-based concept designed by student Benjamin Muzzin for the conclusion of his ECAL/University of Art and Design diploma project. The installation blends discrete, simple imagery into a single image in the mind’s eye to give the illusion of smooth motion. Two 23” IPS screens are fixed together back to back and spun at a speed of close to 90Km/H. The speed at which the screens rotate is such that specific visuals on them appear as 3-dimensional to the naked eye.

An additional 3-dimensional twist has been added to Hennessy and MPC’s installation to create animations visible in 360 degrees, with palpable volume and depth. The image on the screens appears to float in space through the holographic effect of the spinning screens.

Framed within a unique copper claw housing designed by Tom Dixon, MPC Creative built a bespoke support structure and reinforced central axis designed to withstand the centrifugal forces caused by the two screens spinning at over 900 rpm. When rotating, the simple line and particle visuals displayed on the screen appear to merge, to create animated shapes and abstract forms, shaping Hennessy’s world famous X.O bottles and flowing liquid and ice via the persistence of light forms. The rotation velocity conceals the shape of the screens, leaving a floating hologram of the unique motion graphics in 360 degrees. Three distinct sets of graphics have been created to represent different facets of Hennessy, balance, flow and ice.

A unique built-in media player and control system handles the intermittent stopping of the screens and powerful electro magnets position the screens flush to the framing. The automated stopping and starting of the screens, timed with the playing of the motion graphics, reveals the optical illusion. The unique motor, construction and engineering were developed for the project in by Bluman Associates/Artem.

MPC Creative’s Interactive Creative Director, Andre Assalino commented, "As a drop of condensation on a soda bottle provokes thirst, the golden light refraction of the cognac through the bottom of the snifter glass evokes a sense of rich luxury. To recreate that effect digitally, we went through challenging, yet rewarding, mechanical R&D and motion design exploration using a modern persistence of vision technique. Through 3 abstract animations, we were able to convey Hennessy’s timeless qualities and traditions, creating an experience that reflects the brand’s premium values. Knowing the installation was going to be displayed in one of Harrods’ windows, added that extra bit of motivation to ensure we created something truly memorable."

“Crafted Light” launches in Harrods on 1st October for three weeks, just seven weeks prior to the final chapter in Hennessy’s 250th Anniversary story in the UK this year. The live broadcast of the 59th running of the of the Hennessy Gold Cup, at Newbury Racecourse on Saturday 28th November 2015, will be aired on channel 4.