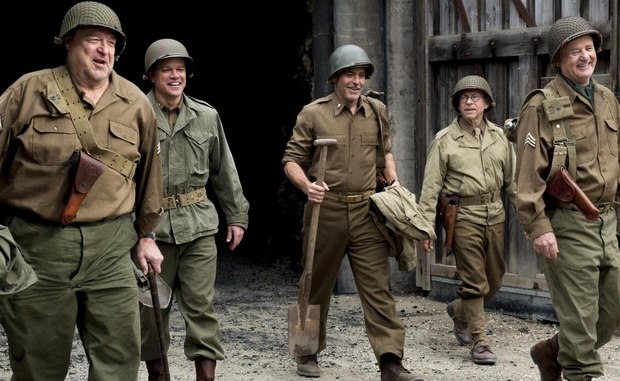 Working closely with director George Clooney and Production VFX Supervisor Angus Bickerton, the brief was to keep the VFX as photoreal as possible, complementing the locations and sets captured by the film’s Director of Photography, Phedon Papamichael.

The team at MPC began by conducting their own tour of Europe, capturing reference and photographic elements in order to re-create key buildings and environments for the movie. Extensive photogrammetry and round-shot photography was gathered to create a library of digital buildings used to populate wide vistas of several war-torn European towns.

The tragic martyr town of Oradour-sur-Glane in France was a key inspiration for MPC’s work, particularly their creation of Caen. Another key scene in the movie required the team to travel to the Santa Maria delle Grazie in Milan, the home of Leonardo da Vinci’s “The Last Supper”; the team photographed the historic church, then created a digital model of the building for their artists to destroy in the computer – re-creating the damage from the bombs that nearly destroyed the church in 1944.  In Germany, they photographed Neuschwanstein Castle, and recreated it digitally to enhance the digital extension of the green-screen set.

The landing of the Monuments Men at Omaha Beach, Normandy was one of MPC’s biggest challenges.  The sequence required the transformation of Camber Sands in East Sussex, UK into post D-Day landing beaches. In one particularly challenging shot, the camera performs a full 180 degree pan across the beach to reveal a massive, sprawling AD-SEC camp over the sand dunes. A large set was built with nearly 100 real tents and appropriate paraphernalia; MPC was called upon to make this location appear at least ten times bigger. The environment and digital matte painting teams spent more than four months modelling and populating this sprawling mobile army base.

MPC built a number of CG vehicles to populate the beaches, including barrage balloons, trucks, cranes, landing craft, and period battleships.  Several other scenes that take place at the camp, day and night, required the addition of CG tents and crowds of soldiers to add the necessary scale.