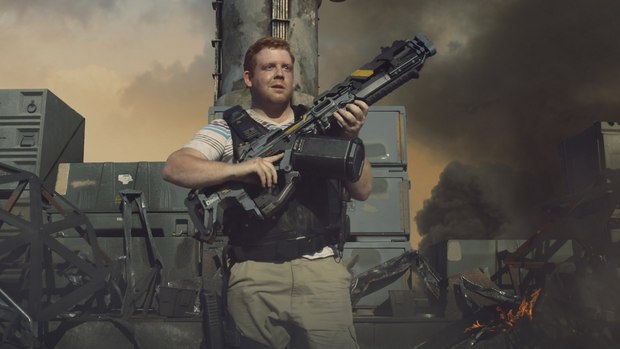 “The Black Ops series is beloved by millions of fans, who have continued to make it the most played series in Call of Duty. This year, the high-profile release of Black Ops III is a pop culture moment for fans to come together and celebrate around the globe,” said Tim Ellis, CMO, Activision Publishing, Inc. “‘Seize Glory’ captures that feeling of exhilaration and accomplishment in which anyone can go on an amazing run and become his or her own champion in Call of Duty. This campaign celebrates our community and the unforgettable gameplay moments they’ll experience in Black Ops III.”

This is director Wayne McClammy's fourth go-round with Call of Duty, and has continued to up the ante with each installment. A majority of the live-action was shot practically, rather than with visual effects, to bring a heightened sense of grit and realism to the spot. Academy Award winning director of photography Dion Bebe teamed up with renowned stunt coordinator Darrin Prescott to lend a cinematic feel to each moment. The film was shot over five days in an abandoned mall in Southern California, as the natural decay and destruction gave the shoot a more authentic feel.

The hero character of the film, Kevin, is played by Thomas Polk, a newcomer to the scene. The hero role reinforces the premise that "there's a soldier in all of us" - as the embodiment of the everyday gamer, who's found a way to be king in Call of Duty.  Polk performed all of his own stunts, including wire work.

Call of Duty: Black Ops III deploys players into a future world, where bio-technology coupled with cybernetic enhancements has given rise to a new breed of Black Ops soldier. Black Ops III multiplayer offers the most engaging and rewarding multiplayer offering to date in the series, where players move fluidly through custom-built environments with finesse, all while maintaining complete control over their weapon at all times. The title also delivers its signature Zombies experience, this time taking it up a notch with Shadows of Evil, a 1940’s film-noir-inspired adventure that is the deepest Zombies experience to date in Call of Duty.

Developed for Next-Gen platforms by Treyarch, Call of Duty: Black Ops III launches worldwide November 6. Activision will put its full support behind the game through an expansive TV, digital and outdoor advertising campaign that will run around the globe. Throughout the campaign, Activision has worked with LA/Amsterdam based agency 72andSunny on overall creative direction.