Based on the musician’s first 2020 musical offering, director Otto Tang’s haunting, black and white 2D/CG short examines a group of neighbors as they spiral through an abyss of repetition. 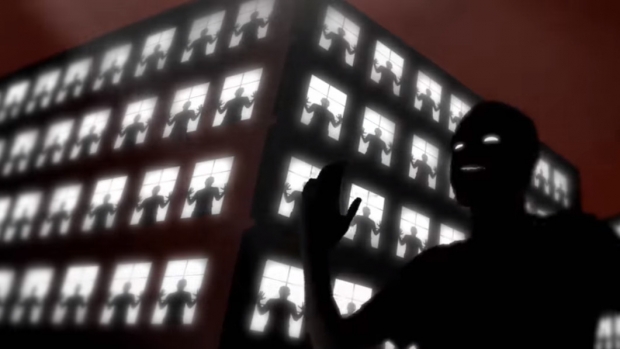 Canadian indie pop singer and songwriter Seth Nyquist, better known as MorMor, has just dropped a new music video, Don’t Cry, based on his first musical offering of 2020, which follows last year’s single, “Won’t Let You,” and his two critically-acclaimed EPs: last year's Some Place Else and his 2018 debut Heaven's Only Wishful.

Created by Titmouse and directed by the Otto Tang (Big Mouth), Don't Cry is an examination of the commonality of existential dread, with haunting 2D/CG black-and-white animation showcasing MorMor and his neighbors as they spiral through an abyss of repetition.

“Don’t Cry went through one of the most intriguing and challenging development processes,” Tang shares. “Production began during the global pandemic. We decided early on to use this unique opportunity to illustrate the signs of our time and our psyche. We aimed to make something deeply personal and every scene was developed through frequent 1-on-1 phone conversations I had with Seth.”

He adds, “The thing that I cherished the most is the chance to share a vision with an amazing musician under what seems to be the most absurd situation. Little did we know that the world would change at least five more times during the pandemic, and it doesn’t seem to be slowing down anytime soon.

Don’t Cry is executive produced by Chris Prynoski, Shannon Prynoski, and Ben Kalina, from an original concept by Tang and Nyquist. Todd Raleigh served as an additional editor; Megan Trevino served as production manager. The animation was produced at Titmouse. The project was funded in part by FACTOR, the Government of Canada, Canada’s private radio broadcasters and Ontario Creates.