The School of Visual Arts announces the winners of its 2014 Dusty Film & Animation Festival and Awards. Outstanding Film (Short Film): Will Henry for Magic for Beginners

Outstanding Achievement in Directing: Juan Paulo Laserna for Las Malas Lenguas and Will Henry for Magic for Beginners

Outstanding Achievement in Screenwriting: Helen O’Reilly for Surviving the Hen

Outstanding Achievement in Cinematography: Wayland Bell for Stray and for Magic for Beginners 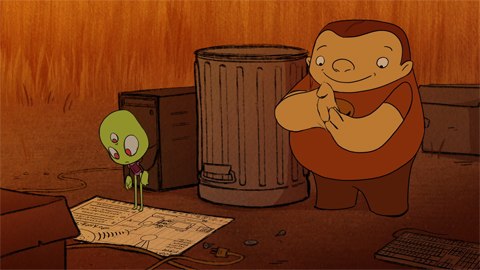 Outstanding Achievement in Stop Motion Animation: Lindsey Schneeberger for The Adventures of Moonshine and the Dirt Children

“We are pleased and honored on this, our 25th year of the Dustys, to recognize these wonderful filmmakers and animators,” said Reeves Lehmann, chair of the BFA Film and Video and BFA Animation departments at SVA. “We are excited to celebrate the successes of our students with many guests from the worlds of film and animation.” Festival producer, SVA faculty member and independent film producer Annie Flocco said, “We’d also like to express a big thank you to the many generous sponsors and supporters, some of whom have been with us for many years, and to the gracious SVA Theatre crew for collaborating on another year of outstanding events.”

The 25tth Annual Dusty Film & Animation Festival and Awards kicked off Saturday, May 10 and ran through Tuesday, May 13. The program included screenings of more than 100 films, documentaries and animations, culminating with the awards ceremony. Over its quarter-century history, the Dustys has launched the careers of many of the graduates, and many have gone on to earn international recognition on the film scene.

School of Visual Arts has been a leader in the education of artists, designers, and creative professionals for more than six decades.  With a faculty of distinguished working professionals, dynamic curriculum, and an emphasis on critical thinking, SVA is a catalyst for innovation and social responsibility. Comprised of more than 6,000 students at its Manhattan campus and 35,000 alumni in 100 countries, SVA also represents one of the most influential artistic communities in the world. BFA Film and Video and BFA Animation alumni have received accolades from the Academy of Motion Picture Arts and Sciences, Sundance Film Festival, New Directors/New Films, International Animated Film Festival in Annecy, France, American Film Institute, New York Women in Film & Television, Venice International Film Festival and the National Board of Review, among many renowned institutions and organizations.