Directed by Brandon Oldenburg and executive produced by William Joyce and Trish Farnsworth-Smith, new CG-animated short is inspired by the life of Antonio Pasin, inventor of the Radio Flyer wagon. 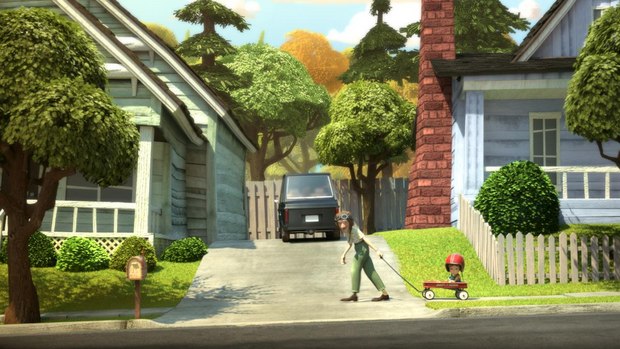 Moonbot Studios, producers of the Academy Award-winning The Fantastic Flying Books of Mr. Morris Lessmore, have released a trailer for their latest short film, Taking Flight. The CG animated short is currently completing its Oscar-qualifying run at the Laemmle Royal Theater in West Los Angeles through September 24.

Directed by Moonbot co-founder Brandon Oldenburg and executive produced by William Joyce and Trish Farnsworth-Smith, Taking Flight is inspired by the life and heritage of Antonio Pasin, inventor of the Radio Flyer wagon.

In this fictional tribute to Pasin’s legacy, what begins as a small boy’s over-scheduled, over-supervised, boring day with Grandpa, turns into a larger-than-life journey, narrowly escaping wild monkeys and battling aliens to save the universe. Through the power of imagination and epic adventure, a boy learns to be a kid, a father learns to be a dad, and a grandpa reminds all of us what childhood is all about.