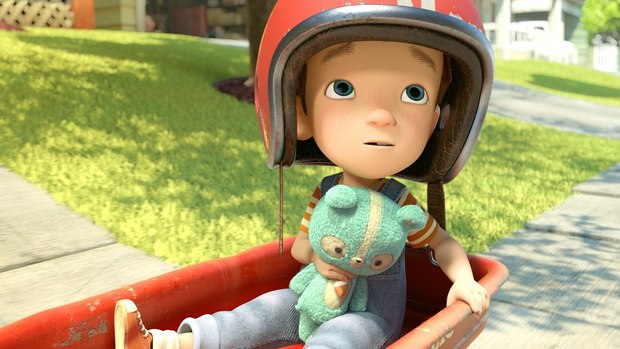 SHREVEPORT, LA -- Moonbot Studios is no ordinary animation facility. Rather than being set up by Hollywood executives, its founders included an award-winning writer and a visual effects veteran. Rather than New York or Los Angeles, it was headquartered in Shreveport, Louisiana; and rather than starting small, it won an Academy Award with its first major project, a poignant 15-minute animated short that owed as much to Buster Keaton as Bugs Bunny.

A fictional homage to Antonio Pasin, inventor of the Radio Flyer toy wagon, Taking Flight is a quintessential Moonbot project. Celebrating the power of the imagination to transform the world around us, the five-minute animation sees its young hero fending off monkeys and aliens during a trip to the park with his grandpa, while his wagon transforms first into a boat, then a biplane, and finally a rocket.

Directed by studio co-founder Brandon Oldenburg, the short exhibits the same warmth and charm as Oldenburg's best-known work, The Fantastic Flying Books of Mr. Morris Lessmore. The dialog-free, partly black-and-white animation for which he shared a 2012 Academy Award with his creative partner in Moonbot, legendary children's author and illustrator William Joyce.

During Taking Flight's four-month production process, Moonbot rendered 178,000 frames of animation, relying on Qube! to distribute the tasks. First across its 36-node render farm and later, when it became apparent that the resulting 21,262 render hours would exceed the capacity of its in-house hardware, to a further 144 nodes on online service Google Cloud Platform.

“We hit a lot of scheduling bottlenecks on Taking Flight, which kept pushing renders further back into the timeline,” says Lead Pipeline TD Brennan Chapman. “We weren't going to be able to do everything [in-house in the time remaining], so we started looking into cloud rendering. I ended up using Google Cloud a lot, and I was able to plug it straight into Qube! to [manage] scalability.”

For Chapman, this kind of flexibility is precisely why Moonbot Studios chose Qube! “We do a lot of different stuff, so being able to customize everything was one of the biggest selling points,” Chapman said. “We looked at a couple of other [farm-management systems], but Qube! definitely stood out.”

As well as using the accompanying command-line tools, TDs can write Python scripts to tailor Qube! to the needs of an individual pipeline, or even modify the inner workings of the software.

“Qube! even enables you to provide your own algorithm to choose which job gets queued up next, and that was a feature I didn't find in many other programs,” explains Chapman. “In most systems, the queueing algorithm is hard-coded and you can't customize it.”

This customizability becomes particularly valuable when several different projects are competing for render farm resources. By writing its own scripts, Moonbot can control which jobs take priority on individual clusters of render nodes. “For instance, we might have some animation playblasts running on the farm, and they might not be as high-priority as final renders on another project,” says Chapman.

By enabling pipeline staff to control the scheduling process centrally, Qube! also shields Moonbot's artists from unnecessarily complex technical decision-making. “The artist doesn't have to worry about which nodes are doing a job, or how everything is configured,” Chapman added. “They just submit it, then we get all of the information, and handle that.”

For projects like Taking Flight, Moonbot Studios uses a range of creative software, including Maya for 3D modeling and animation, Arnold for rendering, and NUKE to composite the final renders. To manage all of the assets those applications generate, Moonbot uses Shotgun, Autodesk's production-tracking and shot-review platform, which it has now integrated directly with Qube!.

“When artists are looking at their shots in Shotgun, they can actually view the renders they've done for those shots, which is super-useful,” said Chapman. “Pretty much any useful piece of data from Qube! is automatically piped into Shotgun so they can view a lot of those stats too.”

In the future, Moonbot aims to use this information to help artists budget their rendering time better, helping everyone within the studio to keep projects on track.

“For artists, the render farm is a black box. They don't have to think about how much they're extending it,” says Chapman. “It would be great if they could see that, say, their first test render used 50 out of the 100 render hours allocated for a shot, so that they can optimize the scene more, or pull render hours from somewhere else, if necessary.”

Thanks to its seamless integration with a wide range of creative tools, its artist-friendly workflow, and above all, its unparalleled customizability, Qube! is now a central part of Moonbot Studios' pipeline.

Its ability to scale from managing shots on a local render farm to distributing them to the cloud proved invaluable in ensuring that Taking Flight was completed on deadline without sacrificing any of Moonbot's trademark visual charm, and through its ongoing work to integrate Qube! with Shotgun, the studio hopes to ensure that future projects are completed even more smoothly.

“Being able to view render stats in Shotgun is going to be huge,” Chapman concludes. “If it's up to each artist to help maintain the render budget, we won't have surprises at the end of a project where we budgeted for 15,000 render hours and now have to do 30,000. That would be super-useful for us and we know Qube! can get us there.”