Moonbot Short, ‘The Boy Who Learned to Fly,’ Now Online

Studio behind ‘The Fantastic Flying Books of Mr. Morris Lessmore’ animates the life of Usain Bolt, the fastest man alive, in a new short film for Gatorade. 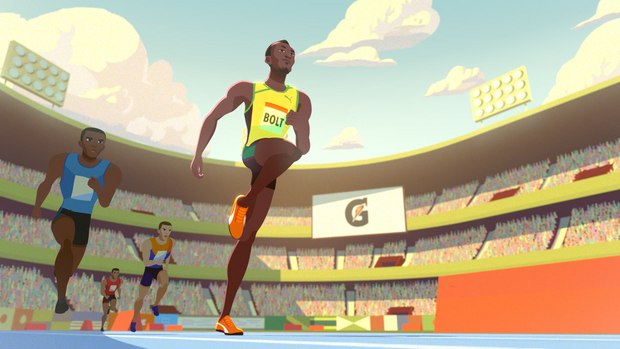 Moonbot, the studio behind the Oscar-winning The Fantastic Flying Books of Mr. Morris Lessmore, has created a new short film, The Boy Who Learned to Fly. The story of the fastest man in the world, the animated short -- commissioned by Gatorade -- is based on the life of Jamaican runner Usain Bolt.

The film is based on true events from Bolt’s life, including a moment in his teens where he put his running shoes on the wrong feet because he was nervous before a big race. The story team shaped the narrative around interviews with his family, including his mother, Jennifer Bolt.

The Moonbot team was excited about using animation to tell Bolt’s story because he is already a very “animated character” and Jamaica is locale ripe for using bold color and shapes. Both informed the art direction for the film.

The character designers created three versions of Bolt for the film, a young wide-eyed kid, teen Usain and the incredible athlete he is today. They based these designs on images from his life but also crafted the designs to contrast the inner struggles Bolt experiences in the film.

Like many of Moonbot’s films, The Boy Who Learned To Fly uses a combination of 3D and 2D animation techniques. This enabled the team to use a 3D camera to move through 3D environments, but retain the texture the team loved in early concept paintings.

Check out the making-of, below: