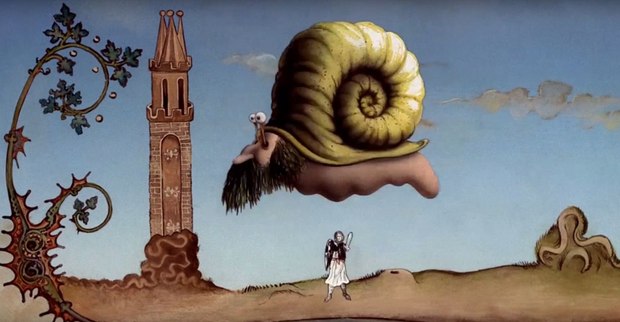 “‘Tis but a scratch!” Celebrating the 40th anniversary of Arthurian opus Monty Python and the Holy Grail, the British comedy troupe has released nearly 14 minutes of unseen footage from the film.

A highlight of the cult classic, 40 years later Terry Gilliam’s absurdist interstitial cartoons still elicit laughter from adults and children alike. The previously unseen deleted clips are narrated by none other than Gilliam himself, whose dry humor -- such as describing snails as fascinating yet “dumb, stupid pieces of meat” -- is as sharp as ever.

“This in fact is probably the only reason to buy this new Blu-ray version of the film, for the new animation," Gilliam notes. “In fact, it's old animation, but it’s the animation that was cut out by the rather envious members of the group, who were trying to restrain a young, talented animator. A man who could have gone on to be a great animator, but no, he was forced into live-action filmmaking to cover the scars.”

Check out the deleted scenes in the player below:

From Sony Pictures Home Entertainment, both a standard version of the Blu-ray and a Limited Edition Gift Set will be available starting October 27. Both versions will include brand-new artwork from Gilliam, as well as 30 minutes of Q&A footage from the Monty Python and the Holy Grail event at this year's Tribeca Film Festival.

Those who opt for the Limited Edition Gift Set will also receive a collectible castle packaging that features “real catapult action and rubber farm animals.”