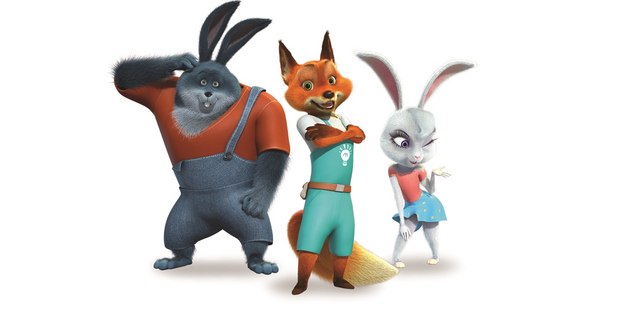 LONDON -- Mondo TV, one of the largest European producers and distributors of animated content, is bringing a wealth of experience and many years of successful content production to this year’s Asia TV Forum & Market 2016. Five new projects in particular will be highlighted at booth G30: Invention Story, Adventures in Duckport, Heidi Bienvenida A Casa, Eddie is a Yeti and The Treasure Island.

There will be a big focus on the brand new 3D CGI and full HD TV series Invention Story. The star of this 104x11’ animated series aimed at three-to-seven-year-olds is an intelligent, thoughtful and creative fox called Kit. In each episode he unveils a new invention that will improve the lives of the inhabitants of Carrot Town. But not everyone is happy with this clever, carefree gadget maker -- especially Mayor Hopner and his gang, who try to find ways to embarrass Kit or steal his ideas. The stage is set for a funny, whacky, exciting story full of incident and humor.

There’s also Heidi, Bienvenida A Casa. This new 60x45’ series -- Mondo TV’s first-ever live-action series for teens -- is based on an idea by the famous Argentinian writer and producer Marcela Citterio, whose vast portfolio of hits includes a number of international success stories such as Yo Soy Franky, Chica Vampiro and Patito Feo. In this version of the classic Johanna Spyri novel, we rediscover the girl and the story we all know about -- the delightful, moving tale of the charming, friendly girl who moves from her rural home to the unfamiliar and confusing environment of the big city. But Heidi’s daily life, friendships and adventures now take place in the modern world. Comedy, humor, enthusiasm and passion for life and music are the main ingredients in this fast-paced and funny show.

For younger viewers Eddie is a Yeti is a delightful animated short-form non-dialogue series in which a little girl called Polly saves a very unusual animal from a bear trap and becomes his best friend. But now she has to keep Eddie under wraps, in disguise, out of trouble and especially away from the clutches of the evil Dr. Atrocious and his winged sidekick The Bat, who want to add him to their sinister collection. This 52 x 3’ 3D CGI full HD series will have great appeal to its target audience of four-to-seven-year-olds, who will love the funny and friendly yeti Eddie and his little friend. The Treasure Island is of course inspired by the Robert Louis Stevenson masterpiece. This 26x26’ 3D CGI full HD series for five-to-ten year-olds, expands on the classic story, telling more stories about the series’ narrator, Jim Hawkins, the young lad from Stevenson’s novel. Every episode begins with Jim reminiscing about the incredible adventures that began at the moment when Billy Bones entered the Admiral Benbow inn that Jim ran with his mother. As he reminisces about each extraordinary adventure, a tale is brought to life in each exciting episode of this thrilling new series.

“The coming year will see a number of major launches from Mondo TV across both animation and live action, with an appeal to an audience that ranges from the very young to teenagers,” said Matteo Corradi, Mondo TV CEO. “We’re looking forward to sharing our enthusiasm for these marvelous programs with visitors to this important show.”