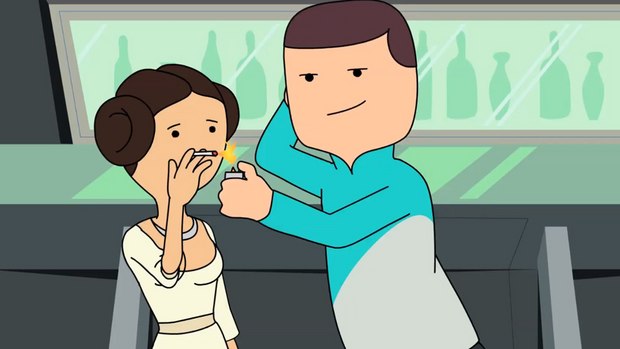 Fusion announced Like, Share, Die, a new quarter-hour, animated sketch series that is being produced by Mondo Media, the leading distributor of animation on YouTube. The show will mix topical comedy with a number of Mondo's original series, made popular on their 2.5 billion view YouTube channel. Executive produced by Mondo's Aaron Simpson and Six Point Harness' Brendan Burch, the show has signed Josh Faure-Brac (SuperNews!) to serve as head writer/producer. Mondo will also source sketches from creators within their curated network of animation channels on YouTube. Like, Share, Die has received a 20 episode order and will premiere this December on Fusion’s cable network, which features a unique blend of news, pop culture, and satire programming. The series will also be distributed on the network’s digital platform, Fusion.net, with segments uploaded to both Fusion and Mondo’s YouTube channels.

"Mondo has a unique sensibility and platform for finding, producing and building large, loyal digital audiences," said Wade Beckett, Fusion’s Chief Programming Officer. "They've demonstrated they can adapt their best performing properties into longer forms for television and feature film, so we are excited to bring their unique brand of comedy to Fusion’s audience."

After a successful raise on Kickstarter, Mondo's hit series Dick Figures, made the jump to a feature film, which received a digital release in September 2013. Based in San Francisco, Mondo is also home to Happy Tree Friends, the most-viewed online animated series of all time. Originating on the Internet, Happy Tree Friends was adapted into a television series that premiered on G4 in the U.S. and MTV overseas. The property continues to generate millions of views and still airs in several markets around the world.

Like, Share, Die is being produced in conjunction with Los Angeles-based Six Point Harness Studios, which just wrapped up production on the animated segments for Seth MacFarlane's Cosmos: A Spacetime Odyssey (Fox).