Mondo to handle all of the newly formed company’s consumer-facing activities, including distribution of its series to digital and broadcast networks; Six Point Harness brand to be utilized for studio and production services. 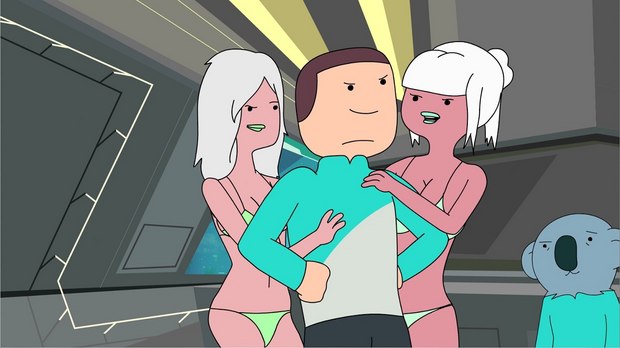 LOS ANGELES -- The companies behind the popular digital animated series Happy Tree Friends, Deep Space 69 and Dick Figures have officially joined forces, having announced that their merger, of Mondo Media and Six Point Harness, has been finalized. The newly formed company, Mondo Media, will be known simply as “Mondo” for all of its consumer-facing activities, including distribution of its series to digital and broadcast networks. The company will utilize the Six Point Harness brand for its studio and production services. Plans for the merger began late last year.

Mondo Media founder John Evershed will serve as CEO, and Six Point Harness founder Brendan Burch will assume the dual roles of Mondo Media’s Chief Creative Officer and President of Six Point Harness, and will join Mondo Media’s board of directors. As part of the merger, Third Wave Digital, investors in AwesomenessTV, MiTu, Tastemade, Stylehaul and Vessel, has invested in Mondo Media, and its managing partner, Allen DeBevoise, will continue to serve on the company’s board.

Mondo Media produces original animated content for digital platforms, television and film, and also owns and distributes an ever-growing library of more than 40 hours of short- and long-form animation. Mondo is in development on a new series for cable television, preparing an R-rated feature-length animated comedy for a major studio, and resuming active production on several of its most popular YouTube series.

“Adult animation is a large, wide-open global video category, and our merger gives us the capacity to firmly establish the Mondo brand across multiple platforms,” Evershed said. “‘Superfan’ content like animation is in high demand on the digital platforms, and our large online audience and high quality make our shows attractive to traditional buyers.”

Burch added, “The 6PH team brings 13 years of experience developing and producing hundreds of hours of TV and feature-length animation; the access to emerging and seasoned writing and animation talent; and relationships with the networks and studios. We believe you really have to have a foot in both traditional and digital to succeed in the emerging entertainment ecosystem.”

Mondo Media operates the most-viewed animation channel on YouTube, which has attracted more than 3 billion views, making it one of the most popular producers of animation created especially for adult fans. Its success with digital shorts has driven a move into “hybrid” series that have been successful both online and on cable television, including Night Sweats, which aired on Adult Swim Canada; Like, Share, Die, which aired on Fusion; and Happy Tree Friends, which aired on MTV in multiple international markets, including Japan, Latin America and Germany.

The newly formed company will be based in Los Angeles, where it recently opened a fully outfitted, 16,000-square-foot studio in Echo Park. Mondo will also continue to retain its office in San Francisco.

The merger of Mondo Media and Six Point Harness was an all-stock merger and officially closed in late 2015; the companies announced that they are now formally operating as a single company. Both companies are privately held, and financial terms of the merger were not disclosed.

Six Point Harness is a leader in the development and production of animation for all ages, and is best-known for its work on Cosmos: A Spacetime Odyssey; Drawn Together the Movie; and Tom Hanks’ Electric City. The company’s original productions include the feature-length movie Dick Figures: The Movie and Prison Pit, based on the award-winning graphic novel.