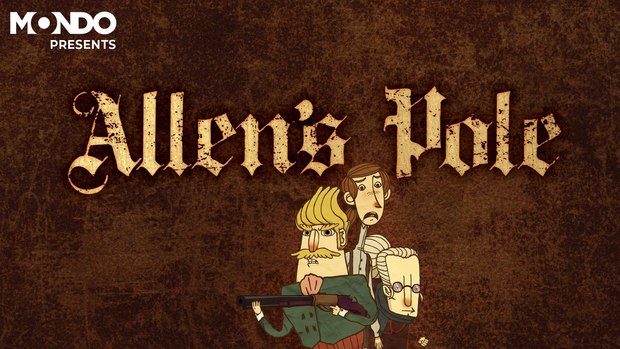 Premiering today, the 13-episode Daddy and the Big Boy will be followed in December by Allen’s Pole in a partnership between MONDO and Oddfellows Labs that continues MONDO’s commitment to shepherding “artisanal animation” -- hand-crafted series, each infused with the unique look and feel of its wildly imaginative creators.

“Oddfellows Labs is a fantastically inventive hive of creativity, and we could not be more proud or excited to bring their work to viewers,” said April Pesa, vice president of development and distribution for MONDO. “These series will be amazing additions to VRV, which has a fast-growing audience of animation enthusiasts and super-connected fans.”

Daddy and the Big Boy follows the exploits of two con artists who pretend to be the long-lost husband and son of a wealthy dead woman in order to steal her estate. Each one thinks the other is for real -- so they’re constantly keeping up an act of behaving like a stupidly happy family.

The premiere episode of Daddy and the Big Boy is available exclusively on VRV beginning today, with new episodes premiering every Tuesday. Following the debut of Daddy and the Big Boy, MONDO will unveil the playfully stylized exploits of a dim-witted explorer searching for the North Pole -- without much luck. Allen’s Pole is written by creator Kevin Lee, a Vancouver-based writer, comedian and improviser, and directed and produced by Oddfellows Labs. The series will debut on VRV in December. Set in 1897, Allen’s Pole follows the misadventures of a self-styled explorer who drags along his lifelong nanny and naïve biographer in a quest to find the magnetic pole. They find little other than friendship, disappointment and danger for which they are woefully unprepared. Employing a subtle artistic style that recalls paper cut-out puppets and whimsical character designs, Allen’s Pole has the look and feel of a fable gone bad.

Both Daddy and the Big Boy and Allen’s Pole are part of a content deal between VRV and MONDO, which is producing more than 20 hours of new animated content for the streaming service from Ellation.

MONDO recently premiered Turbo Fantasy on VRV, which offers a wide array of series from MONDO and its acclaimed production studio Six Point Harness. Series available on the MONDO channel include Cat Agent, Deep Space 69, the French action thriller Last Man, and Gary and His Demons, as well as the global viral hits Dick Figures and Happy Tree Friends. In addition, a library of dozens of individual animated shorts and additional content from MONDO and Six Point Harness are available on VRV.