Hilarious new animated series, about the most misunderstood mythical creature in the world, debuts September 29 on MONDO’s VRV channel. 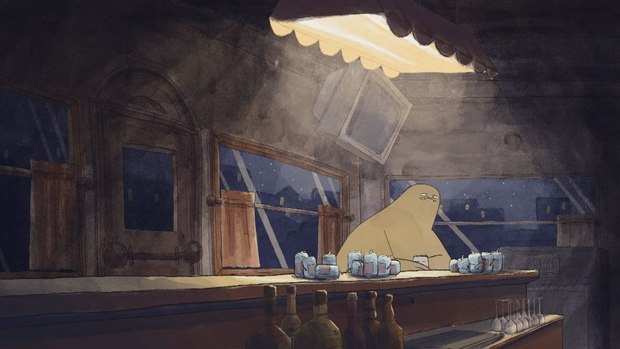 A hilarious new MONDO show, Bigfoot, debuts this coming Sunday; yes, that’s the same wonderful MONDO we all thank for bringing us delectably nasty and terribly witty short form animated series like Happy Tree Friends, Dick Figures and Deep Space 69. Bigfoot, an animated series adapted from Graham Roumieu’s acclaimed memoirs of the most misunderstood mythical creature in the world, premieres September 29 on MONDO’s channel on VRV, the fan-focused, animation-centric video platform, with additional episodes to premiere weekly. The pilot episode of Bigfoot will also be released on the MONDO YouTube channel one week after its premiere.

Bigfoot is based on author and illustrator Roumieu’s series of Bigfoot books, including Me Write Book: It Bigfoot Memoir, Bigfoot: I Not Dead and In Me Own Words: The Autobiography of Bigfoot. “So freakin’ funny you’ll be out of breath,” Salon.com wrote about Roumieu’s work, with the San Francisco Chronicle calling it “brilliantly funny,” and People hailing the books as “a quirky, uncategorizable delight.”

The series – which stars comedian K. Trevor Wilson as Bigfoot – follows the exploits of the self-proclaimed “King of the Forest” as he negotiates difficult relationships with the human and animal world, his complicated past, and his ongoing struggles with self-identity.  The initial 12 episodes explore Bigfoot’s hopeless romanticism, penchant for violence, questionable hygiene, need for acceptance, squirrel anarchism issues, inadequate communication skills, megalomania and other relatable problems.

“Bigfoot would like to express thanks to his die-hard supporters, hurl a log at his non-supporters, and give a friendly (but sort-of creepy) nod-and-wink to the nice people of MONDO and VRV, which are giving the series a perfect home,” Roumieu said, reading from a filthy paper he retrieved from a tree knot hole.

According to Wendy Willis, head of development at MONDO/Six Point Harness, “This is one of those projects that only comes around once in a blue moon. Graham Roumieu’s monster is a stinky, gross, ill-tempered man-animal who is also very human, sensitive, hilarious and even sad. Bigfoot is the kind of iconoclastic property that defines the direction we want to take MONDO’s programming.” Executive producers for MONDO are Willis and Greg Franklin.  Roumieu and Eric Falconer (Blue Mountain State, The Mick) served as writers and executive producers on the series. Bigfoot is produced by Look Mom!’s Josh Bowen, who also serves as executive producer along with Blue Ant Media’s Julie Chang, and is produced with the financial participation of the Canadian Film or Video Production Tax Credit and the Bell Fund.

The subscription-based VRV offers more than 80,000 episodes and a million and a half minutes of content across nine different channels. Under a content deal with VRV, MONDO and its production arm Six Point Harness have created and commissioned dozens of hours of animated content, including Turbo Fantasy, Daddy and the Big Boy, Cat Agent, Deep Space 69, Gary and His Demons and the French action-thriller Last Man, as well as the global viral hits Dick Figures and Happy Tree Friends.  In addition, a library of dozens of individual animated shorts and additional content from MONDO and Six Point Harness are available on VRV.