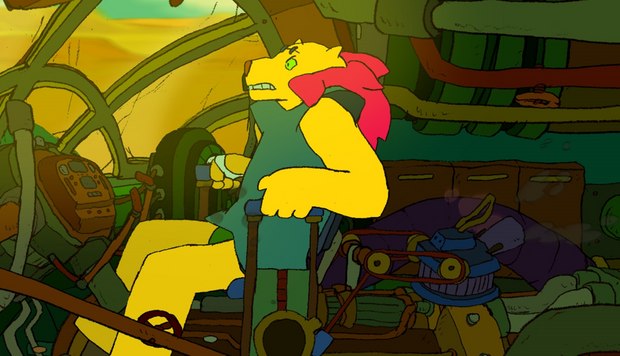 The recently-launched MONDO Channel on VRV will debut Nova Seed on March 28. DiLiberto painstakingly hand-animated each of Nova Seed’s 60,000 frames himself, and the four-year work of passion recently completed a year-long run at global film festivals, including Fantastic Fest, where it had its U.S. premiere; the Fantasia International Film Festival, where it was nominated for the Satoshi Kon Award; and the Carrefour du Cínéma d’Animation in Paris.

Now, fans of animation, sci-fi and independent filmmaking will be able to see Nova Seed themselves on MONDO’s channel. It’s among the channel’s fast-growing library of ground-breaking, animation content. VRV -- the new online video experience from Ellation dedicated to serving fans of anime, animation, games, sci-fi, fantasy, horror and technology -- offers a seven-day free trial of MONDO’s channel, and following the trial fans can subscribe to MONDO on its own or as part of a package of programming.

“Nova Seed is a groundbreaking work of passion and vision, and it’s exactly the kind of animation that MONDO is all about, so we’re proud that it is joining our amazing collection of streaming animated content,” said MONDO’s chief creative officer Brendan Burch.

Nova Seed is an action-packed, post-apocalyptic sci-fi adventure that follows a lion-man “Neo-Animal Combatant,” or NAC, and the Nova Seed, a mystic force of nature that takes the form of a girl. The NAC must save the Nova Seed from the evil Dr. Mindskull, who is bent on remaking the world in his image.

Written, directed and animated by Nick DiLiberto, who previously worked on such projects as Asura’s Wrath, Sonic Chronicles: The Dark Brotherhood and Mass Effect), Nova Seed was produced by Joe DiLiberto, with Ricardo Curtis (The Book of life, The Incredibles, Monsters Inc.), Adele DiLiberto, John DiLiberto, Nick DiLiberto and Wes Lui (The Book of Life, Ice-Age, Dragons: Race to the Edge) as executive producers.

Los Angeles-based MONDO produces original animated content for its multi-platform network, as well as for television and digital. The company owns and distributes an ever-growing library of short- and long-form animation created for 18- to 34-year-old viewers, including the highly acclaimed 2016 Oscar nominee Pear Cider and Cigarettes, which is also available on VRV’s MONDO channel. MONDO operates the most-viewed animation channel on YouTube, which has attracted more than 3.5 billion views. MONDO’s original TV projects include Night Sweats, which aired on Adult Swim Canada; Like, Share, Die, which aired on Fusion; and Happy Tree Friends, which aired on MTV in multiple international markets.