Based on the acclaimed comic series by Balak, Bastien Vivès and Michaël Sanlaville, ‘LastMan’ is directed by acclaimed music video director and animator Jérémie Périn. 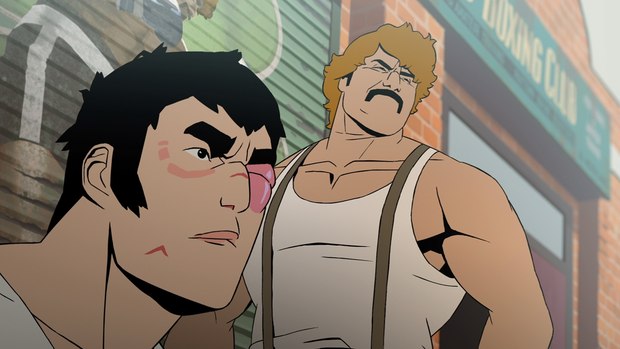 LOS ANGELES -- MONDO has acquired exclusive worldwide English-language television rights to the action/sci-fi animated series LastMan, which will debut on MONDO’s SVOD channel on VRV, adding to its growing slate of action and drama animated series geared toward audiences 18-34.

The traditionally animated LastMan, which recently debuted on France4 in France, is produced by feature-film producer Didier Creste. Based on an acclaimed, best-selling comic series, LastMan tells the story of Richard Aldana, a talented young boxer and mixed martial arts fighter who, out of loyalty, becomes the guardian of Siri, the daughter of his murdered best friend. He is drawn into a supernatural web of danger when the murderous religious sect The Order of the Lion targets the young girl as the key to their “other world.”

LastMan is distributed by Paris-based Dandelooo. Emmy Award-winning animation producer Bill Schultz (The Simpsons, King of the Hill) is overseeing the translation of the French-language series into English for U.S. audiences. Formatted as 26 quarter-hour episodes, LastMan will debut later this year on the MONDO channel on VRV, the new online video experience from Ellation dedicated to serving fans of anime, animation, games, sci-fi, fantasy, horror and technology. LastMan is set 10 years before the events in the acclaimed, best-selling comic series by Balak, Bastien Vivès and Michaël Sanlaville, on which it’s based. The series was animated by Paris-based Everybody On Deck and Je Suis Bien Content.

“LastMan is a pulse-pounding action and sci-fi thriller that perfectly embodies our belief that animation can be daring, exciting, bold and challenging,” said Brendan Burch, chief creative officer of MONDO, which last year acquired streaming rights to Robert Valley’s Oscar-nominated short film Pear Cider and Cigarettes, which is available on the MONDO channel on VRV.

“LastMan is authentic -- an incredible blend of visual style and sophisticated story, a series that has engaged a truly passionate fan base in its native France, and we think will attract an equally enthusiastic reception here in the U.S.,” Schultz added.

In addition to its U.S. debut on the MONDO channel on VRV, MONDO also plans to launch LastMan in other English-language territories. The series is written by Balak, co-writer of the LastMan comic book and co-creator of the wild comedy hit animated web series Les Kassos, which has been viewed more than 250 million times on YouTube. LastMan is directed by acclaimed music video director and animator Jérémie Périn.

LastMan joins a growing lineup of MONDO originals on its VRV channel, including such popular series as Deep Space 69 and Cat Agent and the feature film Nova Seed. MONDO operates the most-viewed animation channel on YouTube, which has attracted more than 3.5 billion views. MONDO’s original TV projects include Night Sweats, which aired on Adult Swim Canada; Like, Share, Die, which aired on Fusion; and Happy Tree Friends, which aired on MTV in multiple international markets.