In a special episode honoring Native American Heritage Month, Molly learns about Elizabeth Peratrovich, an Alaska Native civil rights leader; the award-winning animated series incorporates Alaska Native voices in all aspects of the production, both on screen and behind the scenes. 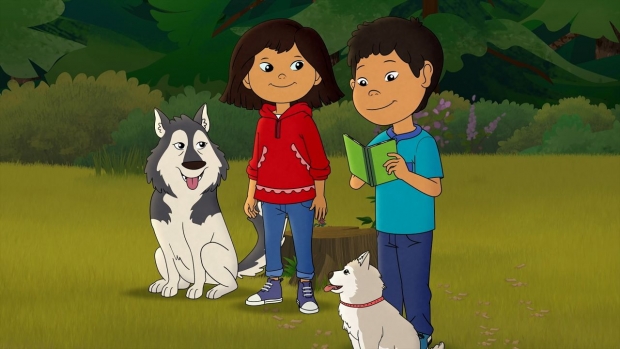 In honor of Native American Heritage Month, Season 2 of GBH Boston’s award-winning 2D animated series, Molly of Denali kicks off with all-new episodes running November 1-5 on PBS KIDS (see local listings). The show follows the adventures of 10-year-old Molly Mabray, a curious and resourceful Alaska Native girl who lives in the fictional village of Qyah, Alaska. The new episodes celebrate the rich and diverse Alaska Native culture, with an emphasis on the importance of family and community.

Season 2 leads off with a special episode in which Molly finds inspiration from the real-life Alaska Native civil rights leader Elizabeth Peratrovich, who was instrumental in the passing of the first anti-discrimination law in the U.S. in 1945. Other premiere week episodes feature Molly and her friends designing a special tree house, helping to train a sled dog, searching for a rare hummingbird that migrates every year from Mexico, and finding creative ways to stay warm in the cold.

“Mouse in the Treehouse”

“Leader of the Pack”

“Every Meow and Again”

Molly of Denali is first nationally distributed children's program to feature Native American and Alaska Native lead characters. The groundbreaking show incorporates Alaska Native voices in all aspects of the production, both on screen and behind the scenes as voiceover actors, writers, producers, musicians, animators, and story and language advisors.