In the new crossover episode coming to PBS KIDS, Molly and her dad happen upon the Kratt brothers who happen to be in Alaska on a ‘creature trail’ looking for a mysteriously lost pack of wolves. 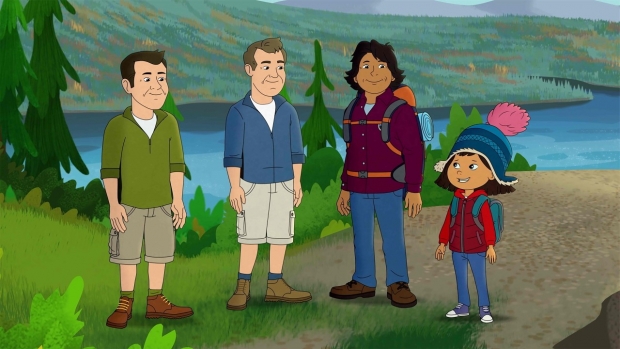 PBS KIDS’ popular kids animated series, Molly of Denali, runs into the Wild Kratts themselves, which is to say, the animated version of Chris and Martin Kratt, aka the Kratt brothers, who just happen to be visiting Alaska, in a brand-new crossover episode premiering Monday, July 18.

When Molly and her dad head out on a hike, they run into the Kratt Brothers, who are exploring the “creature trail” looking for a lost pack of wolves. After a long search turns up no wolves, the mystery remains: where could the pack have gone, and how will Molly and the group find it?

Molly of Denali follows the daily adventures of 10-year-old vlogger Molly Mabray, an Alaskan Native from the fictional village of Qyah, whose family runs the Denali Trading Post. The series is the first nationally distributed children’s program to feature Native American and Alaska Native lead characters. The show incorporates Alaska Native voices in all aspects of the production, both on-screen and behind the scenes as voiceover actors, writers, producers, musicians, animators, and story and language advisors.

New episodes of Molly of Denali will roll out July 18-21 as part of the PBS KIDS summer celebration. New shorts from Xavier Riddle and the Secret Museum are coming in July as well.