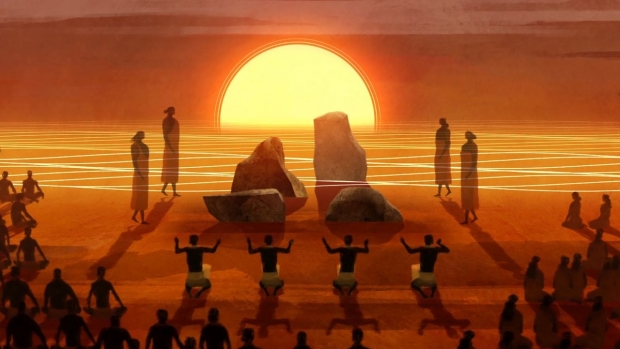 Hinaleimona Wong-Kalu, Daniel Sousa, and Joe Wilson, who directed, animated, and produced the beautifully animated short, Kapaemahu, that tells the story of the long-hidden history of four healing stones on Waikiki Beach, have shared with AWN their conversation with legendary Moana director John Musker about the power of animation to elevate the oral traditions of Oceania.

Musker’s interest in the Pacific began many years ago, when he and his long-time animation partner Ron Clements decided to make a feature based on the Polynesian demi-god Maui. The response from then Disney Animation chief John Lasseter was: “Go research.”

The directors and their team did just that, making several trips to the islands and forming an Oceanic Trust of anthropologists, cultural practitioners, historians, linguists, and elders who helped shape every detail of Moana, from character design to the type of pit used to cook food.

“John really did his homework,” said Wong-Kalu, who is Native Hawaiian and fluent in multiple Polynesian languages.  “That came through in his blockbuster film, and I think it's why he responded so positively to Kapaemahu. He gets what sharing these stories is all about on a deeper level. It was such a pleasure to engage with him.”

​Kapaemahu also required substantial research, including the unearthing of a century-old handwritten manuscript and a trip to Raiatea, the original home of the four healers of dual male and spirit, known as mahu, who are the focus of the story.  Although the four giant stones in which the visitors imbued their powers still stand on Waikiki Beach, the full story behind them has been hidden in plain view.

The talk focuses on the challenge of bringing this ancient story alive through 2D animation.  Musker relates a conversation with a Samoan artist who told him that Polynesia has a stronger tradition of sculpting than of drawing, which is reflected in animation director Daniel Sousa’s visual approach.  “Capturing light means ignoring linework” Sousa says, “and carving out space through mid-tones and color.”

Spend a few minutes and enjoy the the discussion as well as some behind-the-scenes info about the story of Kapaemahu, and then check out AWN’s intimate look at the film, Kapaemahu’ Helps Revive Hidden Hawaiian History of Healing and Aloha, where you can watch the short in its entirety.

The Polynesian approach to storytelling is beutifully captured in the film’s palette, a rich mixture of oranges and yellows that reflect the colors of tapa cloth and lauhala weaving.

Unusual in today’s world of large studio projects, often involving teams of 20 or more, Sousa was the sole artist on Kapaemahu, responsible for the storyboard, animatic, character design, and digital painting of every frame in the 8-minute short. His tools were Photoshop for painting, Flash for motion, and After Effects for compositing, along with Blender for the 3D elements.  For Musker, who is retired from Disney but working on his own short, TVPaint is the preferred tool.

At an opening ceremony for Moana in Tahiti, an elder posed a challenge to Musker: “For years we have been swallowed by your culture. This one time can you be swallowed by ours?”

“This is the same challenge I posed to my team at the beginning of this journey,” says Wong-Kalu.  “I hope we have succeeded.