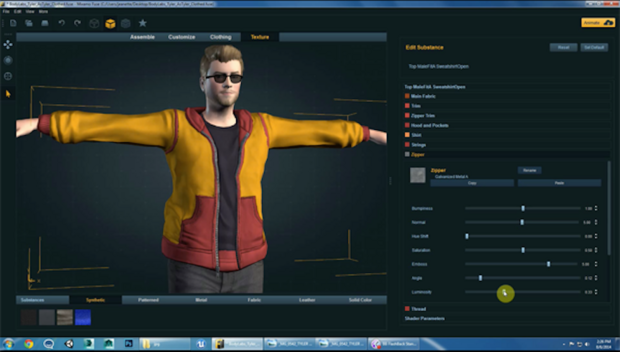 San Francisco, CA -- Mixamo announced that it is now possible to use Kinect for Windows v2 and scanning software to get 3D models into Mixamo’s character creator software, Fuse. In addition to a blog post highlighting the new Fuse-Kinect for Windows v2 workflow, gamers, modders and developers will be able to check out the new workflow at Gamescom in Cologne, Germany (Hall 4.1, Booth B015a).

Using Fuse in combination with the Microsoft Kinect for Windows v2 sensor and scanning software like Body Snap from Body Labs, users can quickly scan their own bodies, import them into Fuse and customize them to their heart’s content. With drag, drop and slide simplicity, users can add or customize limbs, head, clothes, facial features and more. No knowledge of 3D modeling is required. Once customized, each character can be saved and exported for use in games engines and games. Workflows exist for Unity, UDK, Unreal Engine, Source engine, Source Filmmaker, and games like Garry’s Mod and Team Fortress 2.

“It is Mixamo’s mission to democratize 3D content creation and to make the process accessible for everyone, and this is another step in that direction.” said Stefano Corazza, CEO of Mixamo. “Kinect for Windows v2 and Mixamo make it easier than ever for game developers and modders to put their likeness into a game. The new depth sensor more accurately creates 3D body and facial scans, which can then be customized in Mixamo’s character creator solution Fuse. In minutes, the 3D version of you can be running around in a 3D scene.”

Mixamo has also added some other significant enhancements to Fuse that are designed for game developers and advanced users. Those enhancements include support for facial animation blend shapes that are compatible with Mixamo’s real-time facial animation solution, Face Plus, support for 2K texture maps, more realistic lighting and shadows (physically based rendering shader), advanced skin substances (created with Substance Designer from Allegorithmic) and general speed and memory improvements.

“Developers and businesses worldwide are using Kinect for Windows in innovative ways to address challenges across a wide variety of industries and lower the barrier between humans and computers,” said Alex Kipman, Technical Fellow, Microsoft Corp. “Mixamo’s workflow for creating characters with Kinect for Windows v2 is a great example of that. Mixamo lets people without 3D modeling expertise add their user-generated content to games and game development projects.”

Fuse is available on Steam for $99.99 or from the Mixamo website. Kinect for WIndows v2 and scanning software are available separately.