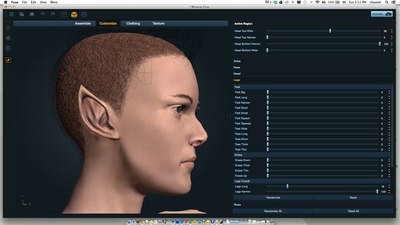 SAN FRANCISCO, CA – Mixamo announced that it will be adding advanced character customization technology into its Fuse product. The new technology, which can be applied to both proprietary and user-imported content, will allow game artists, game modders and hobbyists to create a limitless library of 3D characters for their games simply by clicking on a mesh (arm, leg, cheek, etc) and manually dragging it in a particular direction. Anyone with a current copy of Fuse, or a current All Access subscription, will be able to access this new feature for no additional cost. The new technology will go live in Fuse starting next week, and will be on display in Mixamo’s booth at Nordic Game (booth #A27) starting today.

Available on Steam and via the Mixamo website, Fuse is a character creator solution that allows users to browse through a vast number of meshes (arms, legs, torsos, etc) and texture choices (shirts, pants, etc) and “fuse” them together to create customized, high-quality characters in a matter of minutes. Users can also import content that they’ve created in other software packages to increase their creative options. With the advanced customization technology, over 280 automatically inherited morph targets can be applied to the imported content once Fuse’s standard UV layout is followed.

With the addition of advanced character customization technology, users will no longer be bound by the static mesh choices provided in the software - they will be able to click and drag meshes, including imported meshes, in multiple directions to make them thinner, wider, longer, shorter, etc. This morphing ability can be activated through contextual UI controllers or more traditional sliders. Once customized, each character can be saved and exported for use in games, game engines or other 3D software package. Workflows are also available for Gmod, TF2, SFM and Source engine.

“Fuse democratizes 3D character creation by providing an open content system to artists, game modders and others for creating high-quality 3D characters in minutes, rather than hours or days,” said Stefano Corazza, CEO and co-founder of Mixamo, Inc. “Without losing its simplicity, this release makes Fuse an even more flexible content creation tool. Now the character creation options truly are limitless.”