‘The Mitchells vs. The Machines’ Now on Digital, Blu-ray and DVD

A family road trip evolves into a quest to save the world from a machine apocalypse in the hit CG animated comedy adventure; bonus features include Katie Mitchell’s hilarious sock puppet parody short, ‘Dog Cop 7: The Final Chapter,’ a look into her filmmaking process, a look behind the making of the movie, as well as tutorials on how to make sock puppets and Katie face cupcakes. 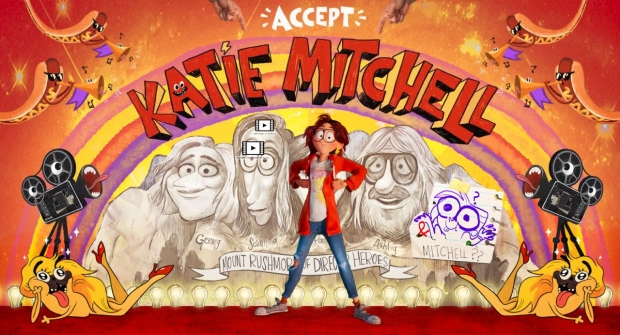 Sony Pictures Home Entertainment today has released The Mitchells vs. The Machines on Digital, Blu-Ray and DVD. In the movie an old school father and his plugged-in, filmmaker daughter struggle to relate as their family embarks on a road trip to her new college. Their drive is interrupted by a machine apocalypse that threatens to tear these unlikely heroes apart unless they can find a way to join forces and save humanity.

As a special treat for fans, included as a special bonus feature on the Blu-ray is Dog Cop 7: The Final Chapter, an all-new stop-motion / live-action / CG mashup mini-movie directed by Caitlin VanArsdale, who served as a storyboard artist on the feature film. The short is a hilarious sendup of genre films and a loving tribute to an amateur auteur with a ton of ambition and a shoestring budget. Read AWN’s interview with VanArsdale here.

The Mitchells vs. The Machines features CG animation, integrated with hand-drawn 2D animation, live-action footage, and puppetry, taking the audience on a family road trip that metamorphoses into a wild ride. Katie's Cabinet of Forgotten Wonders: Take a rare look inside Katie Mitchell’s filmmaking process as she gives you an exclusive look into how the movie was made.

The Mitchells Vs. The Machines: Or How a Group of Passionate Weirdos Made a Big Animated Movie:

How To Make Sock Puppets:

How To Make Katie Face Cupcakes: