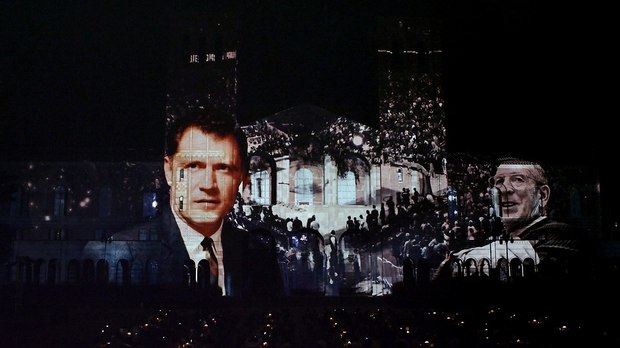 Los Angeles, CA -- Design studio Mirada teamed up with UCLA to create a one-of-a-kind film designed specifically for projection onto the façade of the University's iconic Royce Hall. The 10-minute film produced at 5K+ resolution was developed from beginning to end by Mirada, and became a true passion project for the creative team; Mirada co-founder Javier Jimenez is a UCLA alum, and the company has participated in mentorship programs with UCLA students for several years.

"This project was an incredible creative collaboration; we had writers, directors, musicians, designers, and visual effects artists working closely with the marketing and special events teams at UCLA to create this live event spectacle that pays homage to the history of the University and its values," said Jimenez. "As a UCLA alumnus, I am incredibly proud of this institution, and this project further underscores UCLA's commitment to the future and to continued innovation across disciplines."

The film was directed by Jesús de Francisco, art directed by Mirada's Daryn Wakasa, concepted by David Fowler and de Francisco, led by digital effects supervisor Andy Cochrane and written by Ryan Erke. The entire story was framed to fit visually and conceptually within the size and shape of Royce Hall's towering facade. The larger than life imagery projected onto a 230 x 99-foot surface tells a story in three parts: Part I honors the visionaries that founded UCLA almost a century ago, Part II is a journey through the illustrious history of the institution and its many luminaries, and Part III is a journey of imagination presenting UCLA's visions for the future. The film was narrated by actor John Lithgow and was scored by Atli Örvarsson. "The film combines archival stock imagery with original filmed content along with extensive motion graphics design and visual effects," explained director De Francisco. "The opportunity to direct a projection mapped film, and having the creative freedom to visually transform a building that is such a hallmark of Los Angeles was incredible. To see the project come to life, projected at 468,000 lumens is stunning, and the building and space lent themselves beautifully to the story to be told."

Mirada had a creative and production team of over 40 working on the project for six months, and developed a custom pipeline to produce over 19,000 5K+ image frames, much of which included complex CG animation tightly choreographed to move along the dimensions of the building, timed to the accompanying score. The film debuted at a screening on Friday, May 16th; projection was facilitated by Chaos Visual Productions using D3 software and eighteen 26K Barco projectors.