Minkoff and Morris Team Up on New CG Preschool Series 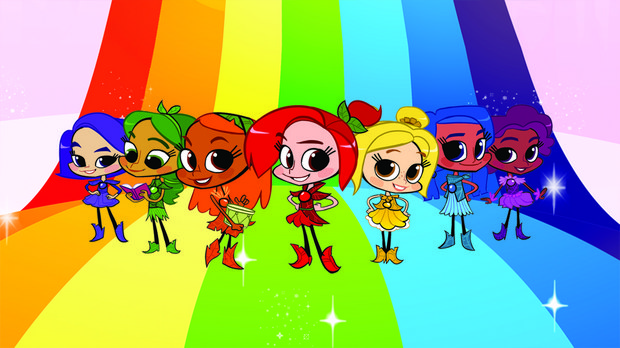 Featuring CGI animation, the creative team is in development on 52 x 11’ episodes of Rainbow Rangers. Minkoff will produce the series with Morris serving as producer and head writer along with his partner Tim Mansfield. Key series designs were created by Brittany Myers and Ruben Aquino, who was a supervising animator on many of the major Disney characters from Little Mermaid to Frozen. Emmy Award-winning producer Andy Heyward will executive produce. GBI anticipates premiering a Rainbow Rangers special in fall 2017 with a full series launch in spring 2018. The company is also in development on a global licensing, merchandising and retail program to coincide with the series launch.

Rainbow Rangers follows the adventures of seven unique magical girls from the other side of the rainbow who serve as Earth’s guardian to protect it from a wicked villain through teamwork, bravery, creativity and compassion.

“We are absolutely ecstatic to be working in collaboration with Rob, Shane, Tim and Ruben on developing this joyous, empowering adventure for little girls,” said Heyward. “The creative genius being poured into this original and powerful property is already attracting incredible interest from all sectors of the industry.”

“Rainbow Rangers is an exciting premise with fantastic characters and an incredible world," added Morris. "It's also inspirational. It's about the amazing power and strength of these seven magical girls. I truly enjoy writing stories that demonstrate girls can do anything, and when girls work together, well, anything is possible.”

“With two young children at home I've been exposed to a lot of TV animation lately and felt it was time to jump in with both feet," explained Minkoff.  “And the appeal of a team of young girls protecting the planet is undeniable and couldn't be more timely. Rainbow Rangers is truly an incredible opportunity, and I’m very pleased to be working with GBI’s creative team.”

“We are very eager to debut the concept to potential media, licensing, and promotional partners at this year’s MIP Junior,” said Stone Newman, who was recently promoted to GBI’s president of Global Consumer Products, Worldwide Content Sales & Marketing. “Our schedule is already fully booked, and we have no doubt Rainbow Rangers will be a huge hit for us at the market.”