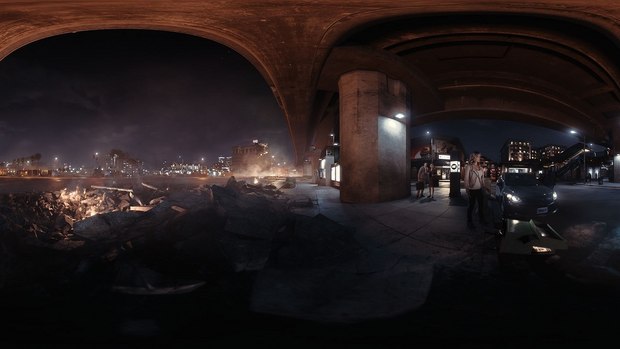 LOS ANGELES -- To accelerate the unique pipeline on HELP -- the recent 360-degree Google Spotlight Story directed by Justin Lin -- The Mill developed a custom VR Shader within the RV image and sequence player enabling filmmakers to review scenes for 360-degree and virtual reality projects. The VR Shader, dubbed the LatLong Viewer, is now also available to all Shotgun RV users with the version 6.2 release, playing back all image formats supported by RV regardless if the image was stitched together from multiple cameras or rendered in CG.

HELP presented unique challenges for The Mill, from acquisition through final delivery. To capture the project, The Mill built a custom 360-degree camera rig comprised of four Red Epic cameras with 180-degree fish eye lenses, and developed proprietary software to stitch together footage from each camera into a continuous 360-degree view as an on-set tool. However review and approval of those 360-degree scenes, which were 90 percent CG, posed a workflow bottleneck. Longtime RV users, the team elected to build a custom shader within the flexible RV framework as a solution for playing back the 360-degree content.

“The problem was we could review images of the 360-degree environment but not video content,” explained senior R&D executive James Studdart. “We weighed our options and could have either written our own custom software from scratch, or created a solution right there within RV. RV was the clear choice – it is flexible enough to support non-standard workflows, it’s already part of our pipeline so everyone would have easy access to the VR Shader and could add notes, and we’d be able to work within the full gamut of files that RV supports.”

The VR Shader proved to be a key advantage for The Mill in working out the review aspect of this, and future immersive projects, as RV is already in use across their facilities in Los Angeles, Chicago, New York and London. The technical challenges of working on non-standard projects like virtual reality and 360-degree filmmaking are forcing studios to restructure their pipelines accordingly, but with the flexibility of RV, support for emerging workflows is a straightforward solution within a familiar off-the-shelf tool. The Mill plans to continue using the VR Shader on future projects, and now that the technology is available as LatLong Viewer in the latest version of Shotgun RV, other studios will be able to as well.

“RV provided the easiest solution to this problem, and also gave us the best bang for our buck,” concluded Studdart. “That level of flexibility is very important as these projects become more commonplace.”