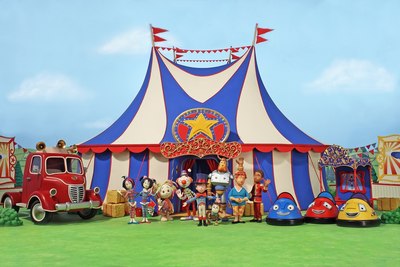 LONDON -- Channel 5’s Milkshake announced that it has commissioned UK and US-based family and entertainment production company, Komixx Media Group, for a second series of Toby’s Travelling Circus following the success of the first series on the Channel 5’s popular pre-school block. The commission comprises 52 ten-minute episodes of the stop-motion series.

The second series will continue to follow the charismatic Toby, a 7-year-old boy and Ringmaster of a travelling circus and fairground. With his mischievous toy monkey Momo by his side, Toby has to make sure he and his friends put on a spectacular show for the audience everywhere they go. Joining Toby in the new season is his American cousin Dani.

Clair Robinson, Acting Head of Children’s at Channel 5, commented, “Toby’s Travelling Circus is hugely popular with our Milkshake audience and we’re delighted at the prospect of sharing brand new adventures with Toby and his friends.”

The commission of the second series of Toby’s Travelling Circus is the most recent Channel 5 commission for Milkshake following the new series Winnie and Wilbur from Winduna Enterprises and the third season of Milkshake Monkey from Match Cut Ltd. which is set to premiere on the pre-school block this September.

“Toby’s Travelling Circus is one of our most popular pre-school properties. Its success in the UK and globally is a testament to Toby’s loving character and engaging qualities. We are delighted this commission from Channel 5 enables us to further explore Toby’s adventures,” added Andrew Cole-Bulgin, joint CEO and Head of Film & TV, Komixx Media Group.

The second series of Toby’s Traveling Circus is set to premiere on Milkshake in autumn 2017.